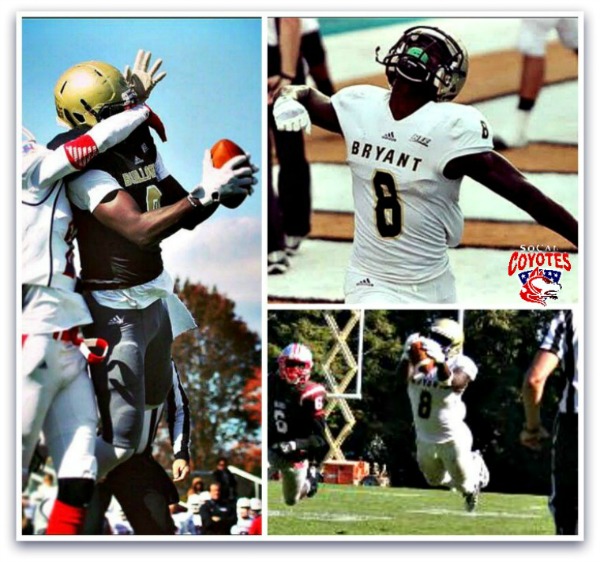 Ward played in the Gridiron Showcase in Dallas in January, where his size and strength impressed scouts from the NFL, Canadian Football League and Arena Football League, as well as Coyotes director of pro personnel Marvin Jones. After going undrafted, Ward met with the SoCal Coyotes to continue his career.

At Bryant University, Ward was a frequent community volunteer, spending his free time with at-risk youth. “Football is about giving back,” says Ward, the oldest brother of four. “I love mentoring kids, and that also drew me to the Coyote program. I’m excited to meet the youth in the Coachella Valley and show them they can be great if they put their mind and hard work to it.

“I’m just a normal kid from South Florida, who would rather be known as a man of great character than just a guy who could catch a football.”

The son of Chad Ward Sr. and Fredericka Shannon, Ward grew up in Delray Beach, Florida, and earned three varsity football letters and graduated with honors at Atlantic High School. He also starred in basketball and track, where he was a record-setting, three-time conference champion in the 800m run, and three-time Track and Field Athlete of the Year.

Ward reports to the Coyotes July 28, where he joins an incoming rookie class expected to rival any in franchise history. The Coyotes, who went 11-1 last fall, are the defending LCFL champions. This will be their first season in the vaunted Southern California Football League, home to four of the nation’s top 10 teams.