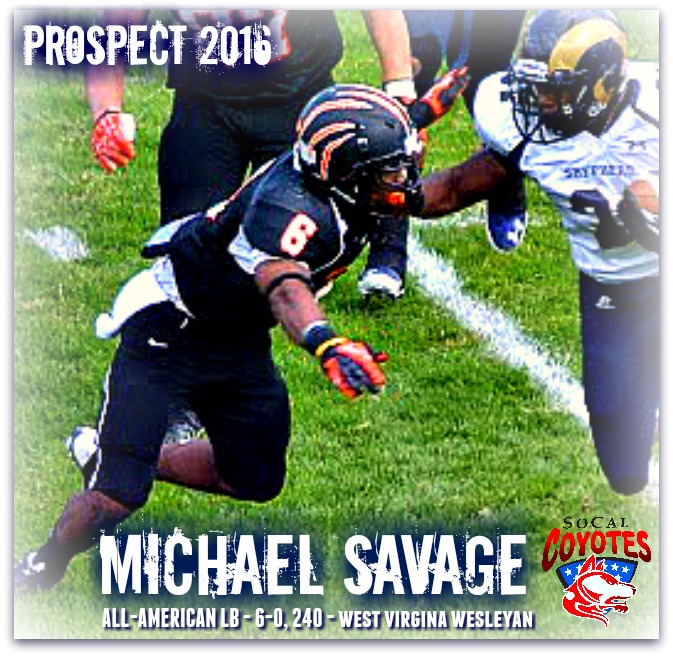 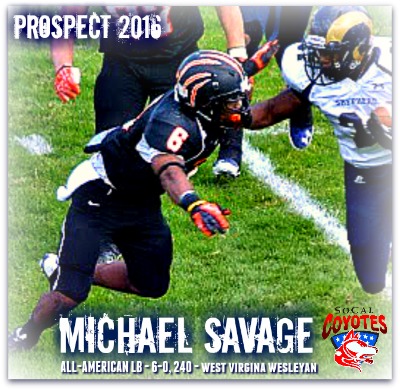 An ordained minister, Savage, 6-0, 240, became the second All-American to join the Coyotes in less than a week. He joins a relentless ‘Darkside Defense’ that anchored the defending LCFL champions, who went 11-1 last year.  The Coyotes are preparing for their first fall season in the vaunted Southern California Football League, home to four of the country’s Top 10 teams.

Since his sophomore season, the gifted Savage has a whopping 230 tackles, and turned heads in Baltimore at the NFL’s 2016 Regional Combine, when he matched his strength with a blazing 4.6 40 time.

“Savage lives up to his name,” said Marvin Jones, Coyotes director of player personnel, who will share time this summer in both NFL and Coyotes training camps. “He’s an inside run killer. He arrives with bad intentions and stops you dead. He sheds blocks, works up and down the line, and he’ll beat you to the corner.”

Savage, who went unsigned after the 2016 NFL Draft, said he was “blessed” when Jones and the Coyotes called to offer him the opportunity to continue his career with America’s #1 Developmental Pro Football Program.

“Blessed is an understatement, to be honest,” said Savage. “I’m humble. I know I come from a small D-2 school. I  know I can play with anybody, but there are plenty of great players at bigger schools who never get noticed by the NFL, either. God puts you where He wants you. He has blessed me tremendously with this opportunity. I give the Lord all the glory and credit for being noticed. What I do on the field will speak for itself. The Coyotes and their fans will not be disappointed.”

Savage reports to the Coyotes July 28, where he joins an incoming rookie class expected to rival any in franchise history. Team President Don West Jr. executed Savage’s contract this morning, and Athletic Director Sean Tully confirmed his enrollment in the team’s Head of Household Work Leadership (HOWL) Program. Savage will complete his orientation and medical intake with Director of Operations Cinthia Paiz today.