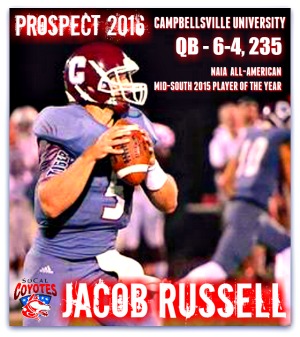 Russell, who was also named the 2015  National Christian College Athletic Association Offensive Player of the Year, directed the nation’s number-one NAIA offense, and led Campbellsville to two straight division championships in his two seasons at the school. He threw for 3,676 yards and 42 touchdowns his senior year, and was Conference Player of the Week eight times in his career.

Russell spent three weeks working with Whitfield in California, then participated in the College Gridiron Showcase in Dallas in January, where he performed in front of scouts from the NFL, Canadian Football League and Arena Football League, as well as Coyotes director of pro personnel Marvin Jones. After going undrafted, Russell said the Coyotes were “the best option to win a championship, and keep improving as a player, and as a man.”

“Everyone sees the gaudy numbers that Jake consistently produces, but what they don’t see is his grind and his focused pursuit of perfection that takes place every day of his week,” said Campbellsville quarterback coach Hunter Cantwell. “There is never a moment that he’s not locked in to making himself and his team better. He gives 110-percent in the weight room, on the practice field, in the film room, and in the classroom.”

The son of Eddie and Judy Russell, Jacob has been a 4.0 student since high school, where he was a four-year starter and 5-A Player of the Year at Anderson County High School in Lawrenceburg, Kentucky. He scored a startling 32 on the NFL Wonderlic test.

Russell reports to the Coyotes July 28, where he joins an incoming rookie class expected to rival any in franchise history.  The Coyotes, who went 11-1 last fall, are the defending LCFL champions. This will be their first season in the vaunted Southern California Football League, home to four of the nation’s top 10 teams.