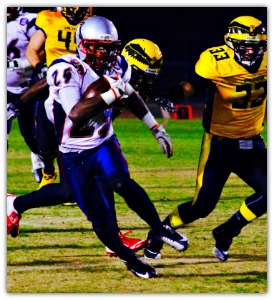 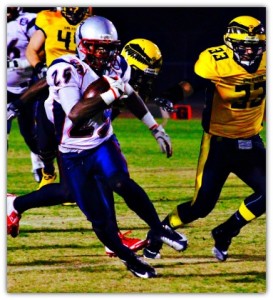 (SHADOW HILLS) – James ‘The Human Highlight Film’ Calhoun Jr. returned a punt 79 yards for a touchdown and caught nine passes for 153 yards and three scores as the three-time champion SoCal Coyotes rocketed to a 51-21 playoff victory over the San Diego Nighthawks Saturday night. Before a raucous home crowd on a stunning moonlit Saturday night, the streaking Coyotes knocked down a franchise-record 12th consecutive win and earned a spot in the December 6 league championship at Jackie Robinson Stadium in Los Angeles, where they will play for their fourth franchise title.

Music, raffles, food and fun kept the crowd buzzing and entertained, in a game that was hotly contested in the first half before the disciplined Coyotes methodically pulled away.

The Coyotes ‘Silver Stretch’ Run ‘n’ Shoot offense was swift, and lethal. Quarterback Zach Adkins completed 25 of 39 passes for 411 yards and four touchdowns, the last to William “Billy” Eichman. Running back Warren Matthews Jr. had 79 yards on the ground. Rashad ‘The Franchise’ Roberts had five catches for 75 yards, while Stevie Will had three catches for 66 yards among the leaders.

Linebackers Devin Jones and Ryan Pervine inflicted thunderous hits and were a disruptive force that all but eliminated the Nighthawks running game. Jones led all tacklers with nine, including two tackles for loss, while Pervine had six tackles, and an interception.

Monstrous nose tackle David Williams collapsed the Nighthawk interior line, and defensive end Jake Sheffield was a wrecking ball off the edge. The Nighthawks tried triple teams, high-low cut blocks and threw the kitchen sink at the Coyotes all-time leading sack specialist, to no avail. Sheffield had seven tackles, including three tackles for loss, one sack, a forced fumble, a fumble recovery and knocked Happ to the ground on nearly every pass attempt.

Kicker Dan Kelly hit a 37-yard field goal to open the scoring in the first quarter, and was good on every extra point. Punter Alex Dunnachie only had one opportunity, and made it count with a 61-yard punt.

THE 12-1 COYOTES WILL BREAK for Thanksgiving, then return to practice in preparation for the championship. Playing two seasons a year – spring and fall – the Coyotes are a model of sustained efficiency – this will be their sixth title game appearance in three years.