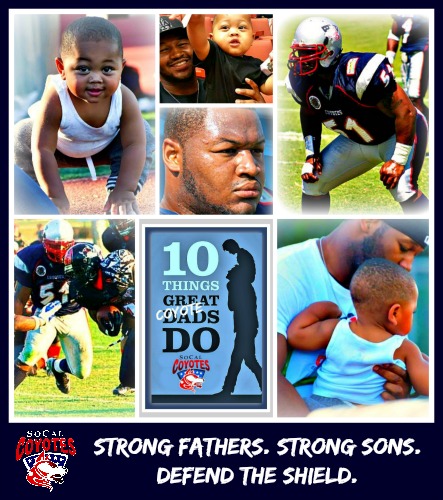 (COACHELLA VALLEY) – A lion’s roar can be heard from a distance of five miles, roughly 88 football fields, and would take a Ferrari racing at top speeds two minutes to cross. It freezes prey, spins earth skyward into dusty cyclones, and establishes the domain of the protector with force. 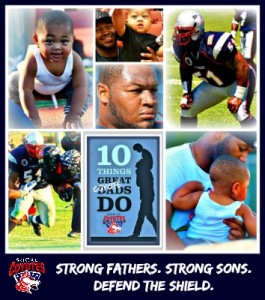 Linebacker Devin Jones of the three-time champion SoCal Coyotes understands a thing or two about frozen prey, force and domain. Those who have played America’s #1 Developmental Pro Football Program and survived the NFL prospect’s teeth-chipping tackles will readily agree.

When Jones – alongside mom Londai – became a father to little Greysen Kai on July 22, 2014, however, the role of protector took center stage. The scabs of a fatherless childhood still sting for Jones, who promises now that his own roar will not be overlooked – or ignored.

“I’m pursuing a legacy that affects everyone I encounter, in a positive way,” Jones says softly. “I want to be that man that makes people say, ‘Devin always was someone who inspired me, helped me, so I’m going to help someone else the same way.’ I want my life to be the man in the lives of others that I always wanted in my own life.”

The son of Wanda Jones Cornish, Jones played collegiately at Southeast Louisiana, which culminated when he earned Most Valuable Player of the Bayou Bowl. He has had private workouts with the Miami Dolphins, New Orleans Saints and saw practice time with the Houston Texans. As a Coyote, he has struck fear in the hearts of running backs and wide receivers who dare cross his face, and holds several team records, including most solo stops in a single game (16).

There is a softer side of Jones, one complicated by a difficult childhood and harsh streets that he was determined to outrun and overcome. Tucked among those memories is one from the fifth grade, when he earned a spot on a school step team, and discovered a new identity. “I wanted it so bad, I did everything I could to make that team, and not only did I make it, I became the leader,” says Jones, flashing his trademark smile.

He also recalls, however, that after attaining his goal, and with no father to press him, he lost his focus, and was later cut from the team – and lost the identity that came with it. This event, seemingly so insignificant, fuels Jones. He understands how the constant role of a father – a leader, a rudder in your life – can make a profound difference.

“There’s something about ‘being a man’ that drives my desire,” he says. “You add up all those tiny little things in a child’s life, and you can write a different outcome, without making him struggle like I did, or fight so hard to get it.”

Opposing ball-carriers soon paid the price for these shortcomings, as Jones chose football to propel him toward a future he didn’t have. He pays particular attention to his influence on others, and realizes that hope cannot disappoint. “When athletes say they are not role models – that’s a lie,” he says. “Children see athletes as hope. People model their lives and every-day actions after the examples we set.”

The Coyote program – ‘Defending the Shield’ of Faith, Family and Football – has “not only given me the opportunity to develop as an athlete, but also holds me to higher standards that have brought me closer to God,” says Jones, who supports his family as an Amazon lead warehouse manager in Rialto. “We have a program that touches lives and changes people. This program has given me the tools to become a better man.”

Jones clings to Romans 8:38-39, two verses “that give me comfort that there is absolutely nothing on earth that can separate me from a supernatural love that GOD has for me.” In times of trouble, he turns to songs of worship and praise from gospel musicians like Marvin Sapp and Fred Hammond, which he says “inspire me to press for the mark, where we see Jesus.”

Opponents, meanwhile, say Jones hits so hard, they see Jesus, and it usually leaves a mark. Make one thing clear – and loud: For the Coyotes’ fiercest hitter, ‘meek’ doesn’t equal ‘weak.’ It is a statement he makes on the field, and carries off it – to express your authority within your domain, you must roar.

“It is not an option,” Jones says. “You must protect, provide, lead and partner within the area of your influence. You must declare your dominion by responsibly exercising your rule within it.”

Devin is our third selection in a new series, where we ask for ‘10 Things Great Coyote Dads Do.’ How is this Coyote dad juggling the journey of life, in his quest, as Super Bowl-winning coach Tony Dungy describes, to be an ‘uncommon man’ in a common world?

1. Be the role model you always wanted in your life.
2. Protect your seed.
3. Teach your son early, the things you learned late.
4. Pray over your child and teach him about Christ.
5. Lead by example.
6. Show him how to love one woman and the importance of family.
7. Spend quality time every day. Our kids will never remember the money, only the time spent.
8. Show them proper ways to take care of themselves physically.
9. Teach them about hard work, and how to work for everything.
10. Teach them about the world and how diverse it is, to be able to interact with all types of people.

THE SOCAL COYOTES NON-PROFIT sports leadership organization encourages the development of young leaders through a series of questions: Do you protect the women under your care? Do your children look to you with confidence? Do other men look to you as someone to emulate? Can your community call on you for strength and leadership? Are you a preserver of culture and a champion of society? Are you a man fulfilling your destiny? Are you a man after God’s own heart?

FOR MORE GREAT things that great dads do, we recommend the book 10 Great Things Dads Do – Strategies for Raising Kids, by fathering expert Rick Johnson.

IF YOU WANT THE COYOTES to visit your school, church or business, or for more information, contact Ron DiGrandi, Community Outreach Director, 760.285.7073.