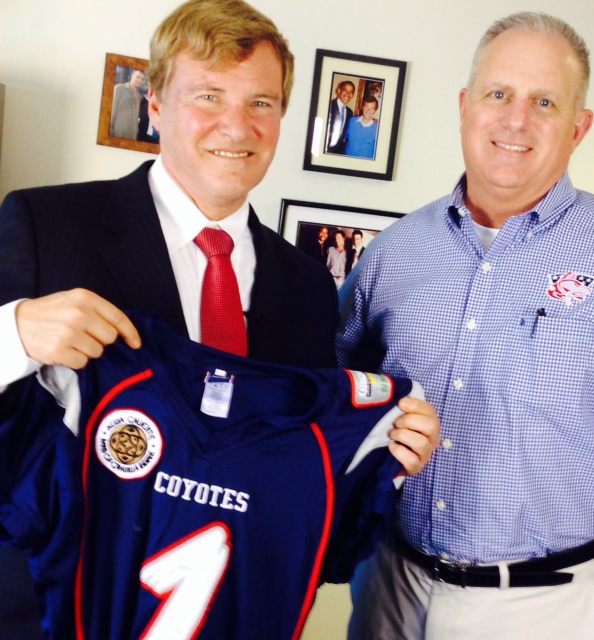 (NEWPORT BEACH) — Over the course of his ground-breaking, four-decade career, power-broker Leigh Steinberg has held up jerseys for clients like Ben Roethlisberger, Steve Young, Troy Aikman and Warren Moon, and represented the number-one overall pick in the NFL a record eight times, in conjunction with over 60 first-round picks.

Steinberg added a SoCal Coyotes jersey to that mix recently in his waterfront Newport office, while providing historical narrative and stunning back-stories during interviews on the set of ‘The Mouse that Roars.’

The ‘Mouse that Roars’ is an upcoming documentary sports film about Darrel “Mouse” Davis, godfather of the Run ‘n’ Shoot and modern four-wide offense. Behind star power like Jim Kelly, Warren Moon and Barry Sanders, the gripping film paints the portrait of Davis – a one-time Oregon high school coach, and how he overcame insurmountable odds to devise a fire-breathing offense that revolutionized the sport.

Filmmaker Spencer Lee is the executive director. To view the trailer, click https://www.youtube.com/watch?v=vEt2SPpaBho.

One of the most influential figures in sports, Steinberg has pioneered the industry, securing over $3 billion for more than 300 professional-athlete clients, while directing more than $750 million to various charities around the world.

Relationships run deep in the ‘The Mouse that Roars,’ in front of, and behind, the camera. Steinberg and Coach Miller met in 1986, when Miller authored his first of 13 books — ‘Third and Long,’ with St. Louis Cardinals All-Pro quarterback Neil Lomax. Steinberg represented Lomax, who set 90 NCAA records playing for Mouse Davis in the Run ‘n’ Shoot at Portland State.

Lomax followed June Jones at PSU, after Jones was drafted by the Atlanta Falcons — and was also represented by Steinberg. Jones, who also stars in the documentary film, authored a book with Miller during his tenure at the University of Hawaii, and today is head coach at Southern Methodist University.

To discover more about the SoCal Coyotes, visit our Facebook page at www.facebook.com/thesocalcoyotes.