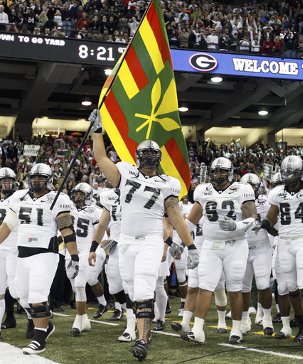 The veteran joins long-ball kicker Dan Kelly as the second prominent University of Hawaii player to sign with the Coyotes, and played on the 2007 undefeated WAC champions who appeared in the Allstate Sugar Bowl.

“Aaron is a phenomenal player who knows our system and with whom we have a history,” said head coach J. David Miller, who has a 30-year history himself with former UH and now SMU head coach June Jones. “June trusted Aaron with protecting Colt Brennan, which should help (Coyote quarterback) Nate Lewis sleep a little better at night.”

Jones and Miller wrote the book “Hawaii Warrior Football: A Story of Faith, Hope and Redemption,” which chronicled the NCAA’s worst-to-first impact that Jones had on the island, and what has become a template for Miller with the AAA Coyotes.

“Aaron will be a calming force for us not only on the field, but also in the locker room, and certainly, in the huddle,” Miller said. “There is no blitz pickup in the Run ‘n’ Shoot that he hasn’t had to deal with.”

As a senior in 2009, Kia was named second-team all-WAC and made the all-WAC academic team. He started all 13 games at left tackle and started 24 consecutive games dating back through his junior season. As a freshman and sophomore, he played in 17 games.

A 2005 high school graduate of Mililani High on O‘ahu, Kia was a first team all-state selection as a senior and named the team’s Most Valuable Offensive Lineman. He paved the way for the Trojans to win a division championship as a junior and senior, and started in the HUB Goodwill Senior Bowl.

The son of parents Wallis and Malcom Kia of Millani, Kia is also a gifted all-around athlete, and qualified for the state swimming championship (50m-freestyle) as a sophomore and also lettered in track.

The Coyotes have three more practices left before the regular season. The team kicks off at 7 p.m. on August 24 against the ‪#‎SanDiego‬ Spartans in their first game as a member of the UFAL Eastern Division of the Southern ‪#‎California‬ ‪#‎Football‬ Alliance (SCFA).

The Coyotes play the ‪#‎national‬ ‪#‎champion‬ ‪#‎Inglewood‬ ‪#‎Blackhawks‬ October 26. The SCFA is the only means for a desert team to win a state or national championship.