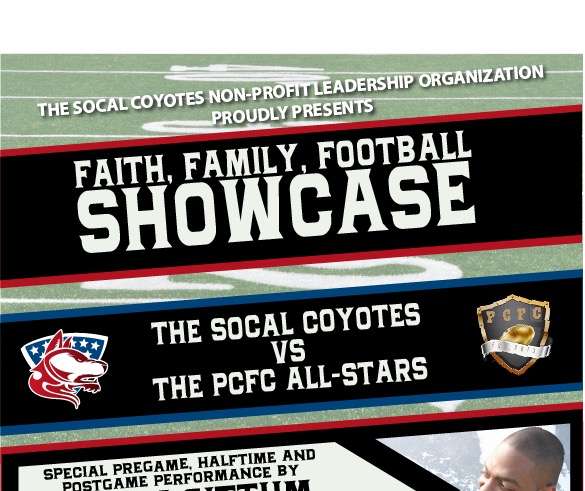 (INDIO) – Families across the Coachella Valley – get ready for an explosive night of ‘Faith, Family and Football,’ when the six-time champion SoCal Coyotes battle the Pacific Coast All-Stars at Shadow Hills Stadium October 19.

Headlining this three-hour revival will be a live concert from Los Angeles-based musician Jimmy Gittum, a former Death Row Records talent who is now a Christian recording artist.

‘Jimmy Gittum and the Pro’s’ will open at 6 p.m., play through pre-game and at halftime, and will close the evening with a thunderous one-hour set.

Kids who show up early (at 5 p.m.) wearing their favorite football jersey will enjoy a special ‘meet and greet’ with star Coyote players, including free photos and autographs.

The game, meanwhile, has all the earmarks of a shootout for America’s #1 Developmental Pro Football Program™.

The Coyotes, whose stellar 2019 class hails from Mississippi, Louisiana, Texas, Washington and Arizona, will unleash record-setting quarterback Michael Karls and their high-octane Run ‘n’ Shoot offense against the best prospects in the Pacific Coast Football Conference.

All-time sack leader (80) Jake Sheffield will lead the Coyotes ‘Darkside Defense’ in their first action of 2019.

Thanks to Coyote corporate partners H.N. & Frances C. Berger Foundation and O’Linn Security, admission is free. Limited parking is $5 a vehicle, regardless of occupancy.

“Fast, fun and ‘fordable,” is how Coyotes head coach J David Miller describes the evening. “We’re expecting a revolution – an outpouring of God’s love and triumph in the hearts and lives of the players, the musicians, and everybody who steps foot in the stadium.” 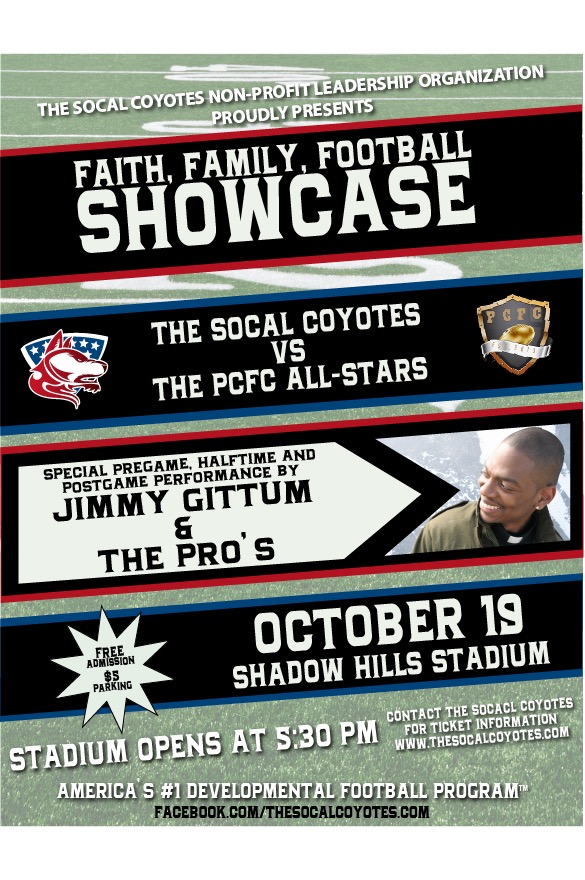 Jimmy Gittum is one of only a handful of people who can attest to the inner-workings of 90’s rap-powerhouse Death Row Records. As a staff producer for ‪Suge Knight‬’s enterprise, the young Long Beach native notably contributed his lyrics and talent to the careers of legendary West Coast names, including ‪Tupac Shakur‬.

Gittum has composed music for major commercial entities, including works for ‪Queen Latifah‬, comedian ‪Eddie Griffin‬, and the Billy Blanks Tae-Bo DVD series. His many projects include work alongside a host of prominent R&B artists, including R.L. & T-Low of Next.

Gittum has a ‘blanket’ contract with Telepictures and MTV, which delivers his instrumentals on popular TV shows such as Tyra Banks’s Americas Top Model, TMZ, Ellen, and The Tyra Banks Show, to name a few.

Always having been a humble servant of God, Gittum currently serves the Lord as a popular and highly demanded musician on the Los Angeles-area church circuit. Jimmy’s talent on the piano has allowed him to successfully diversify his familiarity with his craft.

“I’m not just a beat programmer,” he explains. “I can just as well sit down at the piano to compose my music, which I know is God-given.”

In 2007, Gittum formed his company, Hell No, Inc., as an answer to the forces of nature that encourage failure, and produced an entire debut album entitled “The Vision,” before approaching record executives with his fresh approach to faith-based music.

Gittum’s priorities always put ‘souls saved’ ahead of records sold. His signature brand of hip hop is sincerely honest and thought provoking. His candid voice is coupled with flawless production. His content is both topical and traditional.

As a further testament to his hard work and success, well-known actor/writer/director Robert Townsend used a record from Gittum’s “The Vision” as inspiration for a vignette in his forthcoming television project titled “Music Theater of Hope.” In it, Jim Gittum portrayed himself at Mr. Townsend’s request.

Gittum is a central force in “Inspiration 52,” an LA-based pilot program using the affirmative influence of poetry to teach young people the power of making positive contributions to their own lives and to the lives of their peers.

With “Inspiration 52,” Gittum serves as a motivational speaker and mentor, affecting constructive influence among the young people in which he sees himself.

“I grew up in the same streets as these kids did, and it’s tough,” he says. “It’s a vehicle for me to demonstrate to young people by example that there are positive ways to express yourself, ways to stand out, to be creative, and to live fruitfully, pleasing to the Lord.”

Gittum earned his Associates Degree in leadership at Cottonwood Leadership College. He has further expanded his “Hell No” brand into a clothing line, and has begun work on a new instrumental piano project.

Gittum’s spirit is reinvigorated with his love for people, and for music. Music is absolutely his ministry – and through it he has experienced the joy of helping his fellow neighbor with his gifts.

Off the field, the Coyotes impact more than 50,000 youth annually through their ‘Above the Line’ leadership camps, clinics, and symposiums.