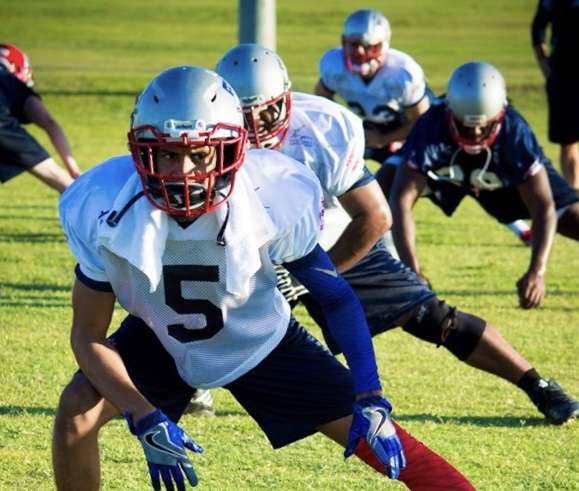 (INDIO) – With desert temperatures in the low 100s, the ‘Coyote Crucible’ is in full swing for the six-time champion SoCal Coyotes, whose 2019 training camp résumé grows daily at Shadow Hills at a fast and furious pace.

The biggest rookie class since 2016 – hailing from Louisiana, Texas, Mississippi and across California – has SoCal optimistic about their chances, but the Coyotes still have a long way to go before the regular season opener on September 14 in San Diego.

But it appears as if one of the most challenging periods of the summer is behind the players and coaches — at least if head coach J David Miller is to be believed.

“The first few days of training camp are like launching a brand new business venture in front of a live audience – with 25 new employees who don’t know how to dress themselves,” Miller quipped, on the annual challenge camp presents.

“For the rookies, it’s like learning Algebra, and we’re teaching it in French.”

The Hall of Fame coach and three-time Coach of the Year – who is entering his 12th season with the Coyotes – pointed out that the first 10 days in particular are especially difficult for everyone involved.

“The first 10 days of camp are hard for everybody because there’s so much new material being installed all the time – and then the other side of the ball is installing new material all the time,” said Miller, who is 87-13 with the Coyotes, 129-23 lifetime.

“But we’re starting to settle in a little bit now. It’s not everything against everything. It’s a smaller menu against the more specific things our opponent does.”

Miller favors a short, pro-style camp like the ones made famous in the Arena Football League by the late Tim Marcum, whose Tampa Bay Storm teams stacked up world titles. Miller, who worked under Marcum and eventually rose to Senior Vice President of the Storm, found magic in the formula.

“Then and now, we believe in intelligent players, short camps, and fresh bodies for the regular season,” Miller says. His veteran-friendly camps ensure the Coyotes are well-conditioned, but also well-preserved, with contact kept to a minimum to prevent injuries.

“We believe players are only as dumb as their coaches,” Miller smiled. “Which might explain why my staff thinks all our kids are geniuses.”