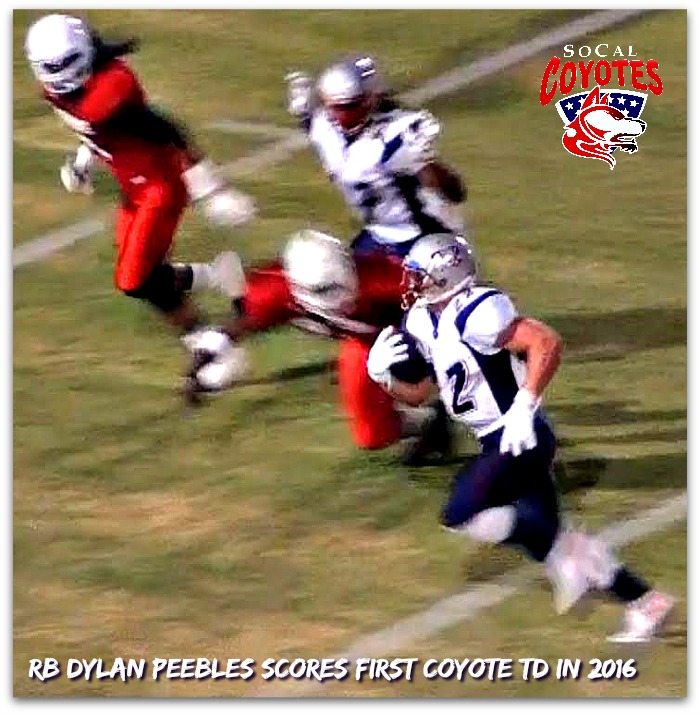 Against a swarming, relentless, suffocating Darkside Defense that put up seven sacks and 11 tackles for loss, the Seminoles went through four quarterbacks, who combined for a total of only 24 yards passing. On the ground, the Seminoles had minus-41 yards rushing. That’s not a misprint.

The Seminoles guessed wrong often against the Run ‘n’ Shoot, and each time, Russell and the Coyotes made them pay.

Russell, in his debut, completed 22 of 31 for 306 yards and seven touchdowns. He called the entire game – are you kidding me? – from under center, unheard of in these parts. The Coyotes rushed for a single-game record 243 yards.

On the game’s opening drive, rookie All-American running back Dylan Peebles – who would finish with 86 yards – drew first blood from the Seminoles, slashing through the line of scrimmage and blasting 25 yards outside to the end zone.

Moments later, a pack of Coyotes – led by defensive ends Jake Sheffield and Kwame Bell – collapsed on the Seminole quarterback, who coughed up the football. Three plays later, Dan Kelly kicked a 37-yard field goal, and the bloodbath, officially, was on.

Saturday night there were no surprises, no second-guessing from America’s #1 Developmental Pro Football Program. Just weapons, everywhere. After a two-week training camp, every man on the roster knew his role and delivered it. Focused, confident, loose. Head coach J David Miller demands a silent confidence from his team, that win or lose, the Coyotes will always be the most prepared, steeped in intellect and personal problem-solving.

Same results. The Coyotes, abounding in seasoned championship veterans, five-star recruits and All-Americans, dissected the Seminoles with surgical precision on both sides of the ball, scoring on offense, defense, special teams.

Sheffield, the Coyotes all-time sack leader, led the Darkside with two tackles for loss, two sacks (one for a safety), a forced fumble and a sack for a safety. Rookie linebacker Azziz Higgins matched him across the board, except he recovered a fumble for a score. Rookie shutdown corner ShaRon Irwin snagged an interception. Linebacker Gary Young had four tackles, forced a fumble and recovered one.

Everyone got in on the act. Lightning rookie Jarrod Harrington, the nation’s college all-purpose leader a year ago, led all receivers with five catches for 98 yards and three touchdowns. League MVP James Calhoun caught two touchdowns, including a jaw-dropping 55-yard catch and run. Rashad ‘The Franchise’ Roberts, the Coyotes all-time leading scorer and receiver, added another seven – the ninth time he’s scored in a season opener.

In the second half, the Coyotes stayed largely on the ground. Veteran Zavier Steward relieved Peebles in the third quarter, and rushed seven times for a game-leading 115 yards and two touchdowns, including a long of 37. Rookie Timothy Mack cleaned up after Steward, and rushed twice for 61 yards and a score.