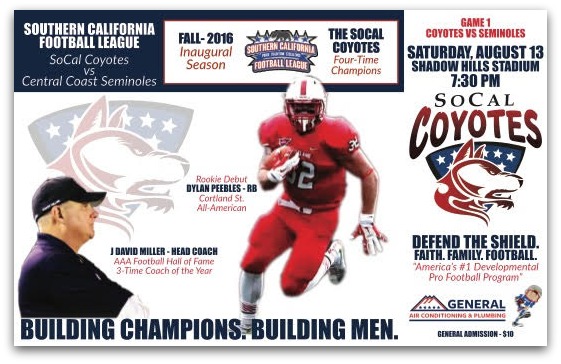 (INDIO) – The defending four-time champion SoCal Coyotes have reported to training camp for their ninth season, ranked in online polls as #1 in the vaunted Southern California Football League, and #4 in the nation by Chicago-based National Football Events, who also has the Coyotes #1 in the Western United States.

But don’t bring that up to head coach J David Miller, who wasted no time preaching humility to his star-stocked team, which is led by electrifying slotback and league MVP James Calhoun Jr.

“Polls are for our fans and our mommas,” he warned. “Pride goes before a fall. We believe the three b’s – be humble, be hungry, or be gone.”

Hunger shouldn’t be the issue. Miller is tasked with blending the dominant 2015 LCFL champions with the greatest rookie class – on paper – in franchise history. The Coyotes went 13-1 last fall, whipping the once-feared Inglewood Blackhawks a record three times by 18 points – twice at Jackie Robinson Stadium, the last time, for the title.

Don’t dare let Coach Miller catch you looking in the rear-view mirror. All jobs, he says, are wide open, and the best players who earn it in camp will start.

“We believe ego stands for ‘Edging God Out,’” said Miller. “Humble yourself. Complacency kills. Comfort kills. I’d rather fight a man with a big house and three kids any day over a guy living out of his car.”

This year, the Coyotes play the Blackhawks, California Raiders and Vegas Trojans – all ranked nationally in the Top 10 – at home, another franchise first.

“It looks like a New England Patriot mini-camp,” joked AD Sean Tully, who said 16 rookies in all will take their place alongside Coyote veterans. All are counting on their experience with America’s #1 Developmental Pro Football Program to deliver an NFL, CFL or Arena league shot.

The Coyotes spent their first week with physicals, orientation and classroom study, followed by the ‘Coyote Crucible’ – two-a-days in full pads under the unforgiving desert sun.

THE COYOTES ARE LED by AAA Hall of Fame head coach J David Miller (116-23, .882), who was named 2015 Coach of the Year by his peers for the third time, in three different leagues. He was named National Coach of the Year in 2012 by the Western Football News.