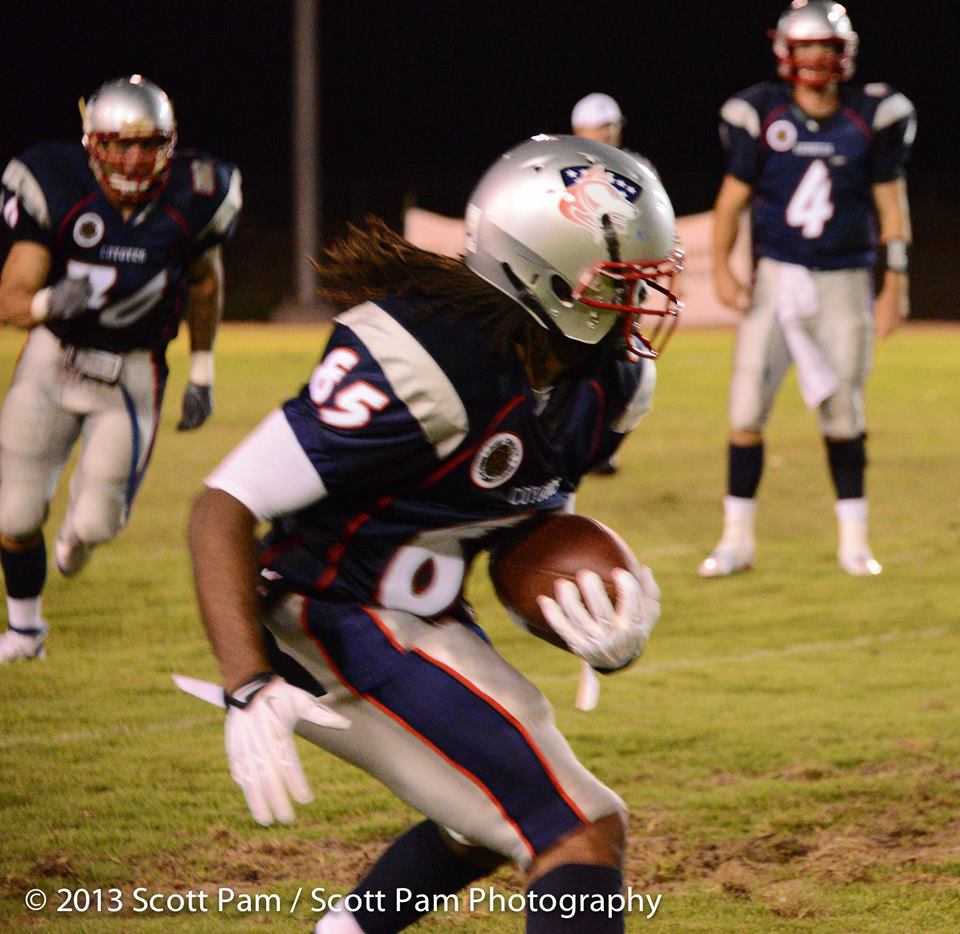 (PALM SPRINGS) – When SoCal coaches looked at the game film Monday and compared it to the actual statistics, Saturday night’s stunning 40-29 road win over the powerful California Tide gave them reason to hope, after the 2-1 Coyotes repeatedly came from behind to find a way to win.

“More ‘we,’ and less of ‘me,’” said head coach J. David Miller. “The guys who talk the least did the most. That was the difference. If we are to ever be champions, we had to quit being talkers of great deeds and doers of none. Our season was on the line, and these young men fought their way out of the darkness.”

Coyote coaches quickly pointed out two critical game-changing plays, one from wide receiver Demario “The President” Brown; the second, from rookie corner Shaine Boyle. Both occurred in a wild first half, where the deep Tide tried to drown the upstart Coyotes before they could gasp for air.

The visiting Coyotes started flat, evidenced by two drive-killing first-quarter turnovers and divisive sideline chatter.  Brown had been benched briefly by Miller for a dropped pass, and the Tide seized their opportunities – and the momentum – to jump to a 14-6 lead.

But when Brown re-entered the fray, veteran quarterback Nate Lewis calmly called his number with the Coyotes famed Choice route. Lewis quickly found the 6-1, 220-pound Brown in the flat, and the pride of Orangeburg, South Carolina showed the Tide – and his head coach – that you can’t impeach the President.

Brown threw the corner to the ground with one hand, ran over a linebacker, and then blasted through the tackle of a diving safety.  With nothing but turf in front of him, Brown ran 68 yards to re-election and redemption.

“That catch and run changed the game,” said Miller. “To that point, we couldn’t pour water out of a boot if the instructions were on the heel. Like the veteran All-American that he is, Demario gave us hope.”

The Coyote bench burst to life. “We are engineered for comebacks!” roared veteran defensive back Robert Smith to a sideline of rookies. “One play can change the game!”

But the rushing Tide – no strangers to big games themselves — answered swiftly. Behind pinpoint passing from  star quarterback Kyle Parrish, the former champions marched into the teeth of the Coyote defense and scored on a 27-yard pass to take a daunting 21-12 lead with barely two minutes left in the half.

The Coyote kick return team took the field for its third time, and frankly, most of the bench was looking to deep return speedsters Rashad Roberts or Wayne Jacobs for an answer. But when the Tide squib-kicked to avoid them, it was cornerback Shaine Boyle who gathered up the bouncing ball at his own nine.

Boyle ran right into heavy traffic, planted, and reversed his field. Finding nothing, he circled back again, this time nearing his own goal line. Boyle then reversed again, but this time, began to pick up blocks as selfless Coyotes circled back to help the darting Boyle out of a deep hole. When he reversed a third time, suddenly, there was nothing but grass.

By the time Boyle had crossed mid-field, “he had already run about 150 yards,” said Miller. “At that point, we just prayed he had another 50 left in the tank.” Miraculously, an exhausted Boyle crossed the finish line while the Coyote bench erupted into bedlam.

When Miller turned on his team at halftime, his words were unforgettable. He swiftly pointed out that it was simple SoCal mistakes, ego and and selfishness — not the Tide –that were trapping the young Coyotes.

“Wake up! Wake up! Or you will cry tomorrow!” the coach screamed.  “Make up your minds! You will either grow up, right here, right now, on the road, and be remembered as a team, or you will die alone tonight in a strange place as a group of faceless, nameless individuals!”

The Coyotes responded, and it was a couple of well-known faces who answered Miller’s cry. After the opening second-half kickoff, the venerable Lewis dropped to throw, and stood fearless in the pocket while Rashad “The Franchise” Roberts broke free over the top. Lewis laced a 78-yard rope down the left sideline, Roberts never broke stride, and the Coyotes finally took a lead they would never relinquish.

This time, unlike in week two against the San Diego Thunder, the Coyotes kept their poise. Lewis ran the Silver Stretch offense with perfect precision, attacking the changing Cal Tide fronts with runs and screens to S-back Nigel Simmons before finding Kevin Page for a 15-yard scoring strike to make it 33-21.

The Tide battled valiantly, but couldn’t score, and Lewis made it clear it’s a bad idea to give him back the ball.  Within seconds, the 6-5, 230-pound gunslinger found the streaking Roberts again on a switch route up the seam for another 78-yard score, and in the blink of an eye, the Coyotes led 40-21.

The jubilant Coyotes gathered afterward on the bus, where Miller applauded his young pack for a team victory that saw us “finally take them Huggies off, and I must say, men, we look pretty good tonight in street clothes.”  The bus nearly burst in raucous response.

Miller gushed over Boyle’s incredible kickoff return, no doubt a game-changer, but the coach surprised his team by awarding the game ball to Brown, who unbeknownst to many had quietly pushed through several weeks of personal trials to rise above adversity when everything was on the line to turn the game around.

Again, the Coyotes roared their approval.

“The President chose action over distraction,” said Miller. “If we don’t score there, the Tide never lets us back in that game. Demario never complains. He walks the walk, and let the end zone do his talking. Great players make great plays in great games. Demario made the play when we needed it most, which by the way, is a staple of his Coyote career.”

“I love you, Mario,” smiled Roberts, as he gave Brown a huge embrace after the game. “You needed this. You showed us all something tonight. You make me believe. Don’t stop. Keep the faith. We got this.”

The Coyotes travel to Los Angeles Saturday night to face the Falcons in their second straight road game.  For more information, contact the Coyotes at [email protected].

(FOR COMPLETE GAME STATS, GO TO THE COYOTE MOBILE YAPP – available free in iTunes or Android Market – and click on ‘stats.’)