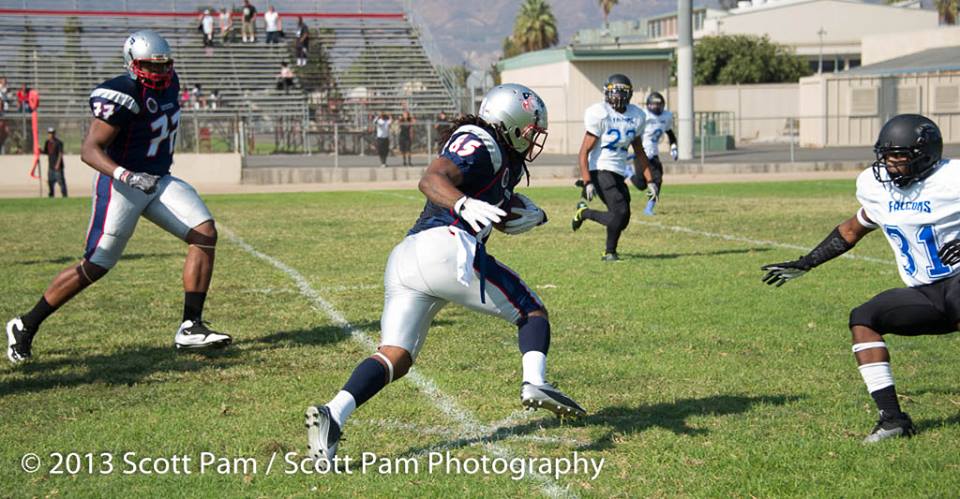 (SAN BERNARDINO) – The SoCal Coyotes scored on their first three possessions to take a commanding 21-0 first-quarter lead and never looked back in a 44-22 romp over the Los Angeles Falcons in a Southern California Football Alliance matchup that improved their record to 3-1.

The game originally had been scheduled for Los Angeles, but became a matinee doubleheader in San Bernardino, home of the Cali Raiders, who played a later game.

Running back Nigel Simmons carried eight times for 36 yards and a touchdown, while receiver AJ Allen caught a 34-yard tightrope for another score. Slotback Wayne Jacobs had 82 yards on six catches, while receiver Jordan Brewer had a 53-yard catch.

The Coyotes led at halftime 24-8. In a second half marred by penalties and game stoppages, SoCal scored twice on Boyle interception returns, Lewis found Allen, and kicker Dan Kelly was good on a 50-yard field goal to easily keep the Falcons at arm’s length.

Next for the Coyotes is the Crown City Hilltoppers, this Saturday night at 7 p.m. at Xavier College Prep.

With six games to play, Lewis — the Coyotes all-time career passer — has already thrown for 1,600 yards and 15 touchdowns. Roberts, meanwhile, has 765 yards and nine touchdowns on the year.

Boyle, who has scored three touchdowns in the past two games, had another punt return for a touchdown nullified by penalty. He leads the Coyote Darkside Defense with three interceptions.