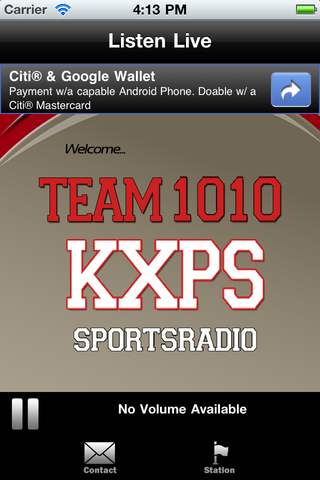 (PALM DESERT) — It’s official: If you own a cellphone, you can ‘Defend the Shield’ this fall with the record-shattering desert champion SoCal Coyotes.

The SoCal Coyotes continued to make good on their unrelenting promise to change the culture of AAA football today when they agreed to terms with KXPS Team 1010 in an extensive broadcast deal that ensures fans around the globe will never miss a single play.

Team 1010 KXPS will carry all regular season Coyotes games plus the post-season, along with a weekly coach’s show. The action for the SoCal Coyotes kicks off August 24th against the San Diego Spartans from the Coyotes new den at Xavier College Prep in Palm Desert.

SoCal Coyotes fans around the globe will now have access to their favorite team on www.team1010.com.

“We are fortunate that the Coachella Valley has a product of the caliber of the SoCal Coyotes,” stated Brian Jewett, general manager of Team 1010. “They are an exciting brand of football that will play well on radio. We look forward to promoting the valley’s greatest football team.”

The SoCal Coyotes “Howl and Prowl Coach’s Show” will air on KXPS Wednesdays from 6-7 p.m. when there is no play-by-play. In addition, Team1010.com will have the latest news and information for the SoCal Coyotes aired throughout its regular programming.

Team officials hinted that the Coyotes’ new revolutionary mobile app, which they ingeniously labeled the Coyote ‘YAPP,’ will be released next week. It will be available free in the iTunes store, and allow their fans — via any mobile device — unlimited access to players, sponsors, merchandise, and of course, play-by-play on KXPS Team 1010.

“We are excited to have a broadcast partner who believes in the vision of our program, and that shares our passion and commitment for growing the Coyote brand and giving the desert, Southern California, and our fans around the world the finest product in our sport,” said team president and head coach J. David Miller.

“We thank (Team 1010 radio personality) Julie Buehler, Mr. Jewett, and the rest of the team at KXPS for believing in this football program, and now joining hands with us as we step forward toward new heights many people in this valley once told us were simply impossible.”

Team 1010 (KXPS), a CRC Media West company, is the Coachella Valley’s only sports station. National hosts Dan Patrick and Jim Rome start of the mornings, leading to local sports talk with Buehler and Bloom, and afternoon drive with Fox and Flint.

The SoCal Coyotes are a AAA member of Southern California Football Alliance, UFAL Eastern Division. The Coyotes were acquired November 1, 2012, and are a privately held non-profit organization.

The Coyotes offer affordable family entertainment to fans across the nation, deliver high impact visibility for corporate sponsors, reach our local youth through mentoring and football programs, mentor and help advance our players, coaches and staff; instill a sense of community pride using local talent, and honor God in all they do.