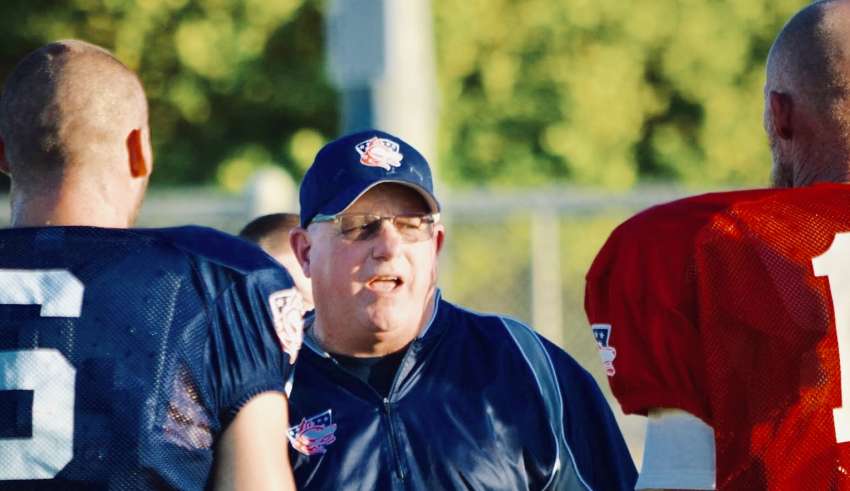 (INDIO) – On June 29, the six-time champion SoCal Coyotes will open their 2019 mini-camp, as preparations officially get underway for the non-profit organization’s 12th season.

Mini-camps are typically glorified practices to remind the players that the real training camp – and 120-degree temperatures – are hovering just around the corner.

The coaches for ‘America’s #1 Developmental Pro Football Program™’ will deliver their annual message to Coyotes old and new: It’s time to get their butts in gear.

This is the time of year when we see Coyotes’ head coach J David Miller doing what he loves most.

In the off-season, Miller’s time with his staff isn’t about speed, toughness or competition.

Mini-camp is about listening, absorbing and learning from his coaches, who in turn are trying to get a handle on the chemistry of the team.

Then, come August, as they have masterfully done across Miller’s 87 victories (against only 13 losses) and six championships – they will polish the positives, and extract the negatives.

In August, his staff will take a crew of 50 – everything from 10-year veterans to walk-on free-agents – and explain how it’s all going to work.

But first comes mini-camp, that start-of-summer hiccup that gives the coaches a peek at the road that lies ahead for their 2019 ‘Faith, Family, Football’ season, in which Developmental Football International (DFI) plans to barnstorm select cities in Southern California.

This year, the teaching is a little more involved. Miller has a restructured and renovated coaching staff to train as well.

Not to overstate – it’s not like the Coyotes hung a “NOW HIRING” sign out on I-10. Like all great coaches, Miller demonstrates – year after year -an uncanny ability of finding and molding coaches into invaluable assets in his system.

The Coyotes’ off-season shuffle is always fascinating, and 2019 is no different. In the past few months, Jeff Johnson has been promoted to defensive coordinator, and new hire Nick LaPointe takes over OL, DL, and RBs. Another new face is assistant James Allwhite, who will support quarterbacks Michael Karls and Dominic Houghton.

But the blood-and-guts consistency will come from Miller’s veteran staff. Twenty-nine-year-old linebackers and secondary coach Greg Marshall is back for his ninth season, along with 75-year-old trainer Mike McBride.

There are other changes too, but the Coyotes have yet to release all their updates and titles.

Reboots happen. By Miller’s design, the Coyotes consistently are a team with one of the smallest coaching staffs in football, which one would think makes their degree of difficulty always slightly higher.

Miller revels in that. The steeper the incline, the better it feels when you’re at the summit.

The Coyotes run like a machine. You think it’s hard to be a game-plan defense, morphing week-to-week depending on the opponent, and making key players know about six different jobs? Too bad.

Think it’s hard to run a precision offense that depends on post-snap reads with about 10 different skill players who can be featured or mothballed at any time? That’s too bad, too.

Would you find it nerve-wracking to still be pulling personnel levers and adjusting game-plan knobs in September and October? Sorry.

Other teams need a Pentagon-sized staff to decide on lunch.

The Coyotes’ braintrust fits in a a kayak.

New players? Sometimes need ‘em. Sometimes don’t. After bonafide superstar quarterback Michael Karls went down with a knee injury last season, the Coyotes went on to win their sixth title with Houghton, a walk-on free agent they pulled out of a coffee shop.

lt takes a true plug-and-play environment to make the leap from frappes to football, which is why the entire Coyote program runs on systems, not personalities.

“Mouse Davis gave us a system,” Miller says of his mentor and Coyote patriarch, an NFL and NCAA icon considered the godfather of the Run ‘n’ Shoot and modern four-wide offense. “We lean into discomfort, and trust the process Mouse taught us.”

Um, sure, but having an influence like Mouse Davis, and being able to execute what he’s told you, are two totally different things. Just because you buy a book on astrodynamics doesn’t mean you can put a man on the moon.

Yet since 2012, Miller’s teams have trounced dozens of teams that had literally twice as many coaches as the Coyotes.

Historically, Coyote coaches love outworking and out-thinking the competition, and are not afraid of fleeting things, like media or public opinion.

Maniacal work ethic, to Miller, is a badge of honor.

Once mini-camp opens, this page will be reporting on the usual stuff, like Karls going 7-for-7 in the red zone, or other crazy defensive statistics that won’t matter come September.

Expect Miller to remind us all of that, because he doesn’t put too much stock in early summer, other than seeing who’s in shape, and who’s not, who “gets it,” and who doesn’t, who fits, and who needs to go.

Here was his answer in 2014, when he was asked how much the team accomplished in minicamp.

“With all due respect, we haven’t really done anything on the field,” he said then with a hint of exasperation.

“We talked a lot, hopefully, we’ve learned a lot, but we haven’t had the competition that we’re going to have in training camp. It’s just not the same.

“Mini-camp is just a tool to help the guys grow and a chance for us to set our expectations and teach faith in the process,” Miller continued. “We’re trying to teach ‘em, get ’em to understand what to do with some confidence, so they can go do it at their highest level in August. That’s really all this is about.”

And speaking of August, it will be a busy one. On August 8-10, Miller will take Karls, defensive captain and all-time sack leader (86) Jake Sheffield, Cummings, Alvarez, SVP Ron DiGrandi and GM Fred Molo to Largo, Florida, where Abundant Life Ministries has invited the Coyotes to lead a first-of-its-kind ‘Above the Line’ men’s retreat.

You almost have to feel sorry for the guys stuck with Miller on this road trip. In between the traveling, and teaching Coyote tenants of “better fathers, better husbands, better men,” you can bet Miller, a three-time Coach of the Year, will use every second of ‘down-time’ to prepare his star players and staff for training camp, which opens August 22.

Teaching, teaching, teaching. In Coyote world, it’s always all about the teaching. This year, a big part of that will be the faculty mixing the old with the new. The 2019 season already appears it won’t be easy for a number of reasons – and the fleet of new coaches is one of them.

Which, one must surmise, is exactly the way Miller likes it.