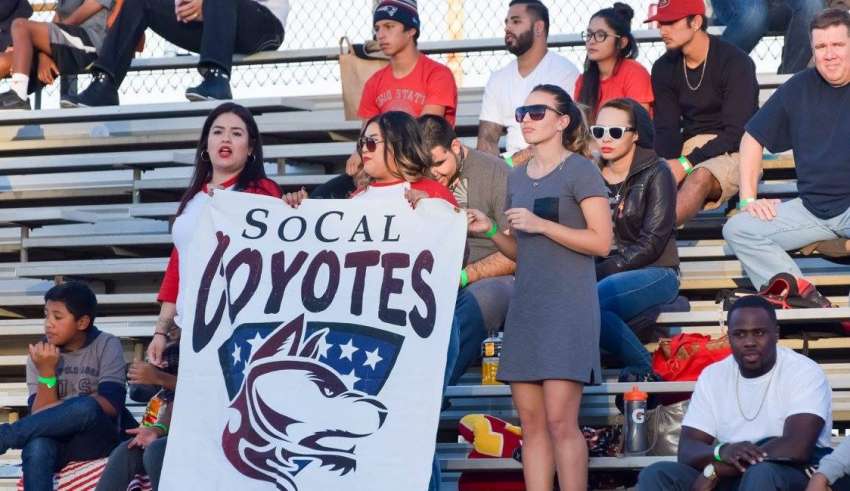 (INDIO) – The Shield it isn’t. But for the SoCal Coyotes, it sure feels like home.

The six-time champion SoCal Coyotes return for their fifth year at Shadow Hills, where over five spring-fall seasons the’ve compiled a daunting home record of 20-2, which represents a significant chunk of their 87-13 record since their inception in 2012.

America’s #1 Developmental Pro Football Program practices, trains and plays at the 10-year-old facility. It’s not a coincidence that the hallow confines of Shadow Hills have played a key role in the Coyotes’ rise to the fastest-growing sports brand in Coachella Vally history.

“Until we build The Shield, Shadow Hills remains the best facility in the desert,” said head coach J David Miller, who is also chairman of Coachella Sports & Entertainment Stadium Authority (CSESA). “It’s been an honor, and a blessing, to be long-term partners with Shadow Hills, both on and off the field.”

Through the years, the Coyotes have generously ‘paid it forward,’ contributing to Shadow Hills High School, its football program, and Desert Ridge Academy, its feeder middle school. The Coyotes’ bi-annual ‘Above the Line’ leadership camps, clinics and symposiums ignite packed crowds and inspire educators and students alike.

Attendance-wise, the Coyotes have yet to fill the 5,000-seat stadium – while still making their case for a 14,000-seat, indoor, air-conditioned arena at the under-development Shield at 1 Coyote Way, destined for the I-10 between Cook and Washington.

“Everything is relative,” Coach Miller said. “The post-modern fan expects more than just a game – they want a sensory-overload, game-day experience. It’s an apples and oranges conversation. The Shield will be an indoor destination that will engage fans and deliver so much more, on multiple levels.”

Miller points to the emergence of the United Soccer League, the nation’s premier developmental soccer initiative whose teams play in state-of-the-art, multi-million-dollar stadiums. He sees a similar role for American football with Developmental Football International (DFI), a CSESA-owned brand.

The Coyotes largest crowd to date is 3,968, a number the team believes it can average once it’s indoors. It’s also a fair bet that casual fans aren’t interested in sitting outside on metal bleacher seats in searing 100-plus-degree temperatures.

Regardless, until the Coyotes move permanently to The Shield, “no place like home” will continue to be the warm embrace of Shadow Hills.