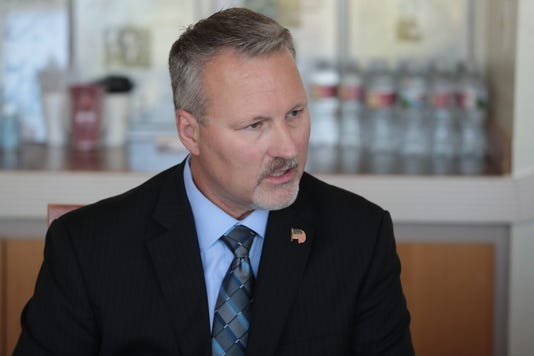 (PALM DESERT) – “I’m ready to honor God in all we do, serve others, build this community, and shock the world.”

With those words, former Indio Mayor Michael Wilson – one of Southern California’s most decorated public servants with a four-decade proven track record among community groups, elected officials, and key stakeholders – accepted his appointment this week to the board of directors of Coachella Sports & Entertainment Stadium Authority LLC (CSESA).

Wilson’s appointment is one of several recent senior-level moves by CSESA that indicate the two-year-old corporation is nearing an announcement on The Shield at 1 Coyote Way, a multi-purpose faith, entertainment and sports campus planned for the 125 acres of prime I-10 frontage between Cook and Washington.

“Mayor Wilson is an outstanding leader with a proven history of success across multiple sectors of industry,” said J David Miller, CSESA Chairman and founder of the non-profit SoCal Coyotes.

Wilson said he was “humbled and honored” to lend his talents to the organization and its non-profit, to the benefit of all Coachella Valley residents, noting that CSESA and the Coyotes already have more 100,000 online followers across their multiple platforms.

“Few organizations have delivered such measurable, positive results to area youth, or have such an exciting, do-able vision, as the SoCal Coyotes and CSESA,” Wilson said.

Miller said that CSESA, after “a thorough and thoughtful search process,” came away confident that Wilson is a key component to achieve their mission.

“Mayor Wilson brings proven leadership and operational skills to the team – with a distinct understanding of the opportunities ahead,” Miller said.

“His pragmatic expertise in innovation, collaboration and inclusion makes him particularly relevant as we transition The Shield at 1 Coyote Way from a concept to reality.”

The Shield is expected to employ over 2,500 desert residents across an array of pro sports, technology, entertainment, medical and broadcasting platforms.

Once fully operational, The Shield is projected to pump an anticipated $1 billion into the local economy every 10 years, while generating an additional $250 million in taxes in that span.

Officials have been mum on a start date since the venture was announced last year. But activity between CSESA and the H.N. & Frances C. Berger Foundation, a CSESA partner which owns the land, has heightened expectations that an announcement is imminent.

Wilson also is expected to play a visible role in the exploding growth of the non-profit Coyotes, a charitable organization supported by CSESA for the development of Coachella Valley youth.

Off the field, it annually offers an array of educational, sports, and ‘Above the Line™’ leadership programs to more than 50,000 area youth.

Wilson’s impact on the Coachella Valley region is unimpeachable.

Recently, Wilson finished a distinguished 22-year career as a City of Indio Mayor and City Councilman. Prior, he served 22 years in the fire service as a Fire Apparatus Engineer, Fire Captain, and Battalion Chief with Cal Fire.

Wilson also served as Interim Fire Chief for the City of Canyon Lake while reorganizing its fire service delivery system and negotiating a new fire contract, saving taxpayers and the city budget well over a million dollars annually.

Michael was the co-founder and Chairman of the Indio Youth Task Force (IYTF), a 501(c)(3) that began in 1992 now called the Coachella Valley Community Trust (CVCT), that worked to change the lives of at-risk youth.

He served as Chairman and founder of the East Valley Coalition, a public/private economic development organization; the Southern California Association of Governments Regional Council serving District 66 and Transportation Committee; Chairman of Sunline Transit Agency; and also served on the League of California Cities Public Safety Committee.

Wilson also possesses certifications in computer-based accounting, as well as economic development from the University of Pennsylvania’s Wharton Business School.

Married to Gina Wilson, Michael has four children and nine grandchildren. They have an active life and enjoy spending time with their family, hiking, and traveling.

“There are tremendous opportunities ahead, given CSESA’s sports, medical, technology and broadcast platforms,” Wilson said.

“Together, with the team they’ve put together, I am confident that we will set new standards for a better quality of life in our valley for generations to come.”

ABOUT CSESA
Coachella Sports & Entertainment Stadium Authority LLC specializes in marketing, funding, media, licensing and branding, and works with an array of sports organizations, entertainment conglomerates, schools and institutions. It owns, manages, operates, partners and commercially represents memorable events that influence every facet of modern culture, with a focus on family values. CSESA is the master developer, operator and manager of The Shield at 1 Coyote Way.

ABOUT THE SOCAL COYOTES
The SoCal Coyotes are the national standard of American developmental football. The Coyotes non-profit organization provides elite athletes a professional environment that refines and showcases their skills through trademarked processes similar to the NBA’s D-league and MLB’s minor-league systems.