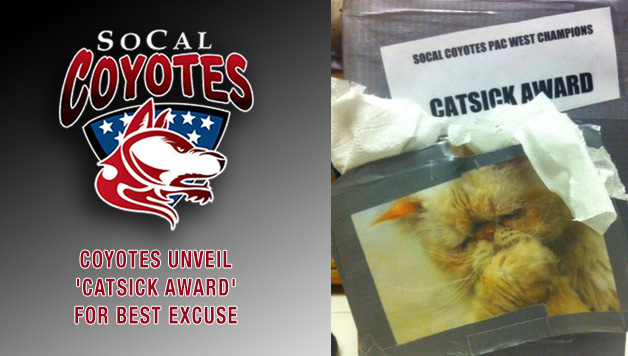 (CATHEDRAL CITY) — The reigning champion SoCal Coyotes unveiled their ‘Catsick Award’ at practice last night, to be presented each week to the player who offers the best excuse for unexcused absence, tardiness or non-medical injury or illness.

The award was named in honor of an unnamed player who dubiously claimed to miss practice because of — you guessed it — a sick cat. It was later discovered the player didn’t own one.

“To get the Catsick Award,” said defensive end Jordan Cornell, “you must nominate yourself by giving your teammates any excuse. The captains will vote on the best one.”

The award is made of duct tape, “because anyone who makes excuses needs it to hold themselves together,” Cornell said. “It’s also got some Kleenex, in case sympathy is necessary.”

On the front is a photo of an ailing cat. “It should be noted,” Cornell added, “that real Coyotes eat cats.”