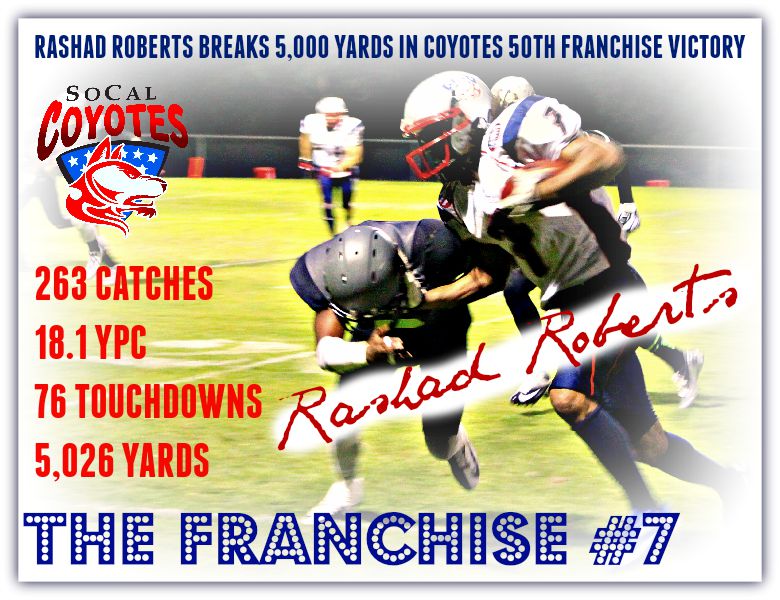 Adkins’ production was the highest output for any Coyote quarterback in their debut. The Coyotes put constant pressure on the Ryders, including relentless onside kicks and opting to go for it on every fourth down.

James ‘The Human Highlight Film’ Calhoun led all receivers with seven catches for 171 yards and three touchdowns. Stevie Will had five catches for 151 yards, including a 70-yard bomb. William ‘Billy’ Eichman hauled in six catches for 88 yards and a score.

Behind a dominating offensive line, running back Warren Matthews carried 13 times for 131 yards and two scores, including long runs of 22, 21 and 16 yards.

Jake Sheffield led the ‘Darkside Defense’ with two sacks, two tackles for loss, and eight tackles. Jerimiah Spicer had five tackles, a forced fumble and a fumble recovery. Matt Arias had three tackles and a sack, and cornerback Ridge Turner snagged an interception.

ADKINS TIES THE RECORD SET BY MICHAEL KARLS on October 19, 2014, when he threw nine touchdowns and ran for another in an 82-25 victory over the San Diego Stallions. Karls threw for 483 yards in that game.