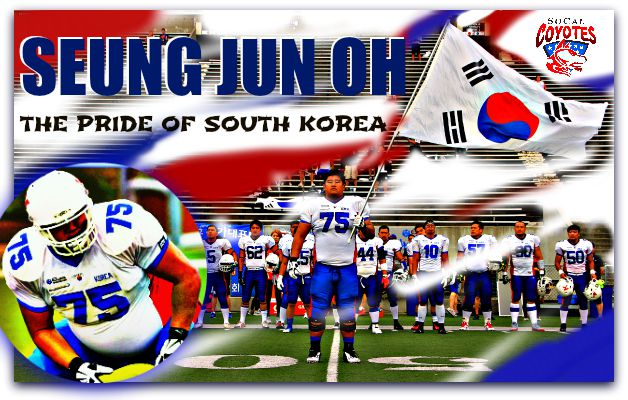 (PALM SPRINGS) – The perennial champion SoCal Coyotes addressed a major question on the offensive line today with the signing of South Korean national Seung Jun Oh, 6-4, 330, a significant procurement of arms that will play a role in the first test firing of rookie quarterback sensation Zach Adkins Saturday night against the Cali Ryders.

Jun Oh, a North Carolina Central product fresh from CFL and Arena Football League workouts, played for the California Sharks earlier this spring. He steps into an offensive line that averages 330 pounds across the board, including Victor Gil, Ray Argueta, John Zazueta and Cedric Cox.

For the first time this fall, the Coyotes have a full battery of healthy – and proven – linemen, who represent three countries. “They look like a United Nations sub-committee,” said head coach J David Miller.

Seung, 25, is a former Korean High judo champion, and most recently anchored the South Korean national football team during the International Federation of American Football world championship. His path to the Coachella Valley has been a fascinating one. Born in Busan, South Korea, Jun Oh commuted frequently to the United States until he finally made it home, in Fontana, California.

“I used to be in Judo and my aunt lived in California, so I was always here,” Seung said. “I liked the weather. I liked everything. I kept visiting. I called my dad and told him, ‘Dad, I want to live here.’ I went back and applied for a visa and came back. The first year I lived with my aunt and then a year later my entire family applied for a visa and moved here.”

As a student at Los Osos High School in Rancho Cucamonga , Seung – in a clever move to polish his English and ‘Americanize’ his social skills – applied his athletic prowess and overwhelming size to the offensive line. He set himself apart with intelligence as quick as his feet – and a punch like a mule-kick.  He was more than just good – he blossomed into a major college player at North Carolina Central.

“As a lineman, contact is man-to-man. In Judo, everything is about using balance and momentum. I found the same thing in football,” says Seung.  “When they pull, I push. I use their momentum. It’s easy to me.”

Jun Oh’s talent has attracted scouts and opportunities. This spring, as a California Shark, he played against the Coyotes. “No question, he’s got great size, hands and feet – he played great football against us,” says Coyotes’ Coach Miller. “But more than football, he’s a great human being, with great attitude, great work ethic – all those things that improve everybody when he steps on the field.”

Oh was attracted to the Coyotes “because it’s not just football, it’s family.” His character, maturity, and leadership, says South Korean head coach Seong Il Baek, is what sets Seung apart. “He is always the leader,” Baek says. “He steps up and makes everyone better.”

The greatest motivation for Seung, however, just might be the example he sets for little brother Dong, who is following in his big brother’s steps at nearby Chaffey College, in hopes of D-1 opportunity.

“He is always watching me,” smiles Jun Oh. “I have to be example, at all times, in football, yes, but most of all, in life.”