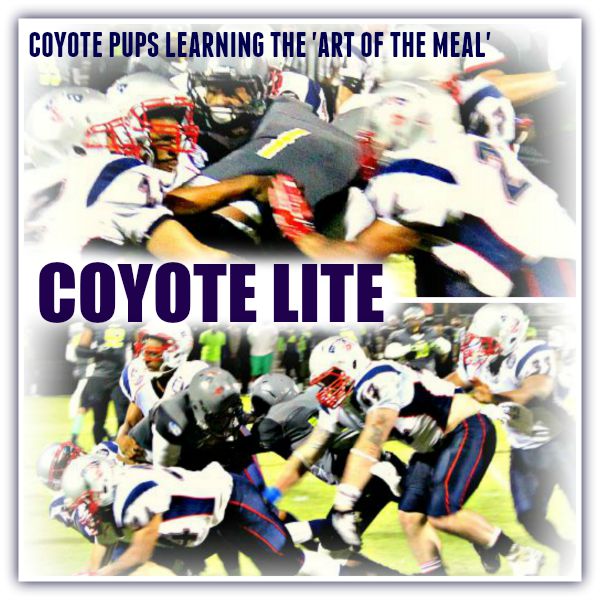 SOBOBA) – When veterans Jake Sheffield, Anthony Spencer and LeRon Wilson stepped into the SoCal Coyotes defensive huddle last Saturday night against the Cali Ryders, the faces staring back at them were fresher than peppermint.

“I thought, wow, these kids look like freshmen, they’re just puppies,” growled defensive end Sheffield, an Arizona State standout and the Coyotes career sack leader (16). “But we have a long way to go, and we don’t have the luxury of time. They have to bite right now.

“We don’t care where a kid comes from or what his age is. However you got here, you’re here now, and you have to make plays or we have to find somebody else. Be physical. Smack’em in the mouth. This organization and this defense has a history of ballers and brawlers. Within the rules, of course.”

Um, of course. But in an opening day loss to the San Diego Stallions, “we sounded like powder puff football,” grimaced head coach J David Miller. The Coyotes lost six players in that game, and injuries and absences forced the Coyotes deeper into their defensive roster than any other time in franchise history.

The Coyotes reached out to players from earlier tryouts. Piece by painstaking piece their staff mixed and matched new personnel with available parts to create what assistant head coach and defensive coordinator Shane Helms refers to as ‘Coyote Lite’ – a ‘Darkside Defense’ whose 11 starters Saturday night – minus Sheffield, Spencer and Wilson – averaged 22 years of age, and mostly rookies.

“Chase and swarm, wrap and tackle,” Helms ordered his crew Saturday night. “Our defense is engineered so that players can play fast. The downside if they don’t is they’re on the field a lot longer. The young guys are starting to see what can happen when they perform their assignments at full throttle.”

These young Coyotes responded, and how, against a bigger, older, and certainly more experienced, Cali Ryders offense.

Rookie Matt Arias (who?) was everywhere, and delivered a thunderous sack – (that’s who). All 20 years old of him. “Matt’s first professional game against the Stallions two weeks ago was an eye opener for him,” confides Coach Helms. “His second game, you could tell by his performance he had gained tremendously in confidence.“

The bright spots were everywhere.

-West Alabama rookie Ridge Turner had an interception and broke up four passes.
-Freshly minted UTEP grad and defensive back Nick Gathrite, who looks barely old enough to buy milk, pitched a shutout at corner, batted down passes, loaded up on tackles and had an interception slip through his hands.
-Free agent linebacker Dorian Cannon joined the violent fray at linebacker, alongside ‘veterans’ Steven Broadway and Jerimiah Spicer, who in his second season, is still just 22.
-Rapidly improving John Paiz sprinted 60 yards across the field on a kickoff to save a touchdown, and in the rotation, made open-field tackles and played mistake-free.

Finally, pads were cracking and helmets were flying as ‘Coyote Lite’ cut their teeth. Some rookies seemed to fear the boiling Sheffield more than the Ryders themselves.

“They’ve still only seen my good side,” gruffed the dominant Sheffield, a decorated, battle-tested Marine, who sounds every bit the drill sergeant. A no-nonsense perfectionist, Sheffield added two more sacks Saturday to his Coyote career-leading total.

“Bottom line is our coaches are looking for the right mix of players who follow direction, make plays, don’t make mental mistakes, and can be trusted, play after play,” he says.

The game itself was never in doubt. A furious assault from the Coyotes’ Silver Stretch lit up the scoreboard en route to a 76-6 win, but almost lost in the thunder of the offensive cannons was the visible fire from ‘Coyote Lite’ – a snapping pack of pups who riddled the Ryders with four sacks, interceptions, two forced fumbles and stopped them on downs six times.

“I’m told once a dog tastes blood he won’t stop biting,” says Jake Sheffield. “If that’s true, we’re about to find out.”