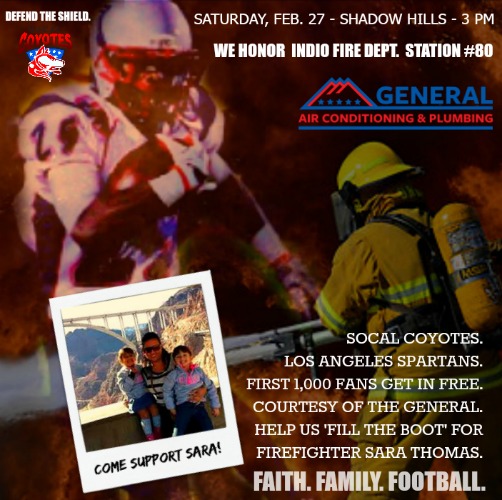 (INDIO) – For the past 15 years, firefighter Sara Thomas has battled for the lives of others. On February 27, you can help battle for hers, by joining the General Air Conditioning & Plumbing and the four-time champion SoCal Coyotes at the home opener of America’s #1 Developmental Pro Football Team at Shadow Hills. 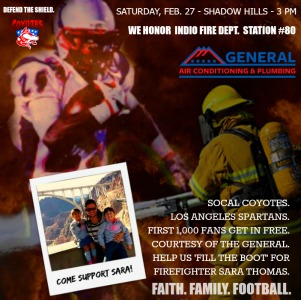 Award-winning civic and business leader General Air Conditioning & Plumbing bought out the entire stadium so you can enjoy a FREE afternoon of faith, family and football – and ask that, on your way into the game, please ‘FILL THE BOOTS’ of the brave men and women of Station #80, Sun City, Shadow Hills, led by Captain Robert McIlroy, the 2015 Firefighter of the Year.

All donations will benefit stricken firefighter Sara Thomas in her personal fight against cancer. After the discovery of a tumor, the disease has spread to her lungs and liver, and the 40-year-old mother of twin six-year-old girls is receiving critical alternative treatment not covered by insurance. Her daughters – Mira and Olivia – are rooting for their mom, and their collective future.

The Coyotes open their Pac West spring season against the Los Angeles Spartans, with kickoff scheduled for 3:05 p.m. The Coyotes and The General invite you to enjoy high-octane football and a full day of music, food and entertainment. Children will meet the firefighters of Station #80, Sun City, Shadow Hills, who also will provide tours of service cars and trucks, with flashing lights and sirens.

“We are humbly honored to stand by Sara and her family, and to recognize the firefighters in our community who protect us,” said  Frank Harrison, president of General Air Conditioning & Plumbing.  “What’s more fun than a spring Saturday of Coyote football in our desert sunshine with your family? It’s a privilege to bring us all together as one big desert family, and give the Coachella Valley an afternoon of faith, family and football – for a great cause.”

Expect the Coyotes to hold up their end of the afternoon. America’s #1 Developmental Pro Football Program is stockpiled with NFL, CFL and Arena Football prospects, and attempting an unprecedented three championships in three different leagues in a single calendar year.

If this is your first Coyote game, be on time – the football fireworks start the second league MVP James ‘The Human Highlight Film’ Calhoun returns the opening kickoff. The Coyotes explosive ‘Silver Stretch’ Run ‘n’ Shoot offense averages 60 points a game, and the ‘Darkside Defense’ is loaded with hard-hitting talent. The Coyotes are 63-11 lifetime, with four championships.

TO RESERVE YOUR FREE SEATS, go to https://ticketriver.com/event/18744 and PRINT your tickets.

FANS CAN JOIN INDIO FIREFIGHTERS AND COYOTES PLAYERS for autographs and selfies immediately after the game in ‘THE GENERAL FAN ZONE.’ Kids are encouraged to seek out their favorite Coyote and have it published on the team’s Mobile ‘Yapp’ and across Coyote social media.

TO DOWNLOAD THE FREE COYOTE ‘YAPP’, visit iTunes or Android Market, search and download ‘SoCal Coyotes.’ In addition to up-to-the-minute news, photos and features on the four-time champions, the Mobile ‘YAPP’ also gives fans discounts and loyalty rewards at supporting partners. Fans can also upload their favorite pictures, stories or even ‘Ask the Coach’ to run their favorite play. Find out  why the Coyotes were named America’s #1 Developmental Pro Football Program at www.thesocalcoyotes.com.

NATIONAL FOOTBALL EVENTS, a Chicago-based governing body that sanctions developmental professional football, ranks the Coyotes fourth in the nation in their latest polls, and first in the Western Region. The Coyotes are the only California team ranked in the National Top 10. “All this means is the bullseye on our back just got bigger,” sayshead coach J David Miller. “The only poll I believe in is called a scoreboard. Our players must prepare at playoff level every week, for every team.”

OFF THE FIELD, the SoCal Coyotes are ‘boots on the ground’ throughout their communities, shaping the lives of thousands of kids and teens from all walks of life by introducing them to core principles and values such as integrity, respect and perseverance. Boys & Girls Clubs,  the YMCA, the Desert Strength Academy, the Boys & Girl Scouts of America, Rotary International and dozens of middle schools are among those who benefit each year from the efforts of the staff and players of the SoCal Coyotes, who partner with communities to develop leadership and effect change to improve the lives of youth.

FEEL THE POWER OF the most dominant sports team in desert history as a corporate partner and community leader with the four-time champion SoCal Coyotes. Ron DiGrandi, SVP Business Development, is waiting for your call at 760.285.7073.