(INDIO) –  SoCal Coyotes linebacker, CFL prospect and Chicago native Gary Young believes the first lesson about the power of a real man is to stop making excuses. The second lesson is that no one can force you to step up to your calling – or keep you from achieving it, even if it’s your own dad.

He recalls the afternoon when he and his sister Angelik, still in high school, sat together, holding hands, on their front porch stoop in Southside Chicago, waiting for a long-lost stranger – their dad – to come home.

By that time, Gary had grown up too fast, too soon. When he was just nine, his expecting mom, Selena Maynie,  was injured in a car accident and his baby brother was delivered stillborn. Then they discovered cancer in his mom, and for the next three years, together, they battled it into remission. As far back as he could remember, he had helped his mom anchor their home, raise his sister, cook and clean, pray and protect. 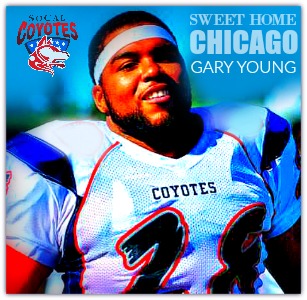 By high school, Gary was skeptical when his dad asked for a second chance. But that day, outside on the porch,  was to be his dad’s day of forgiveness, a day to unwind the years of turbulence and abandonment. But as the sun disappeared and temperatures dropped, so did his hopes. “He never called, he never showed up,” Young says softly. “That’s a special kind of hurt, like being shot through the heart.”

REJECTION EITHER CONSUMES YOU, or fuels you. Young chose to battle the bitterness. “You either make excuses, or be the difference in your destiny,” he says. “Make the most of where you are, and trust God to do the rest. Your family, your work, your community, your team – that’s all on your back.”

Buoyed by his mother’s passion and courage, and eventually, the surprise support of a step-dad, Young sculpted his disappointment and anger into An All-State, All-American nominee and top-ranked prospect out of Chicago’s Crete-Monee High School. He earned Illinois Defensive Player of the Year and graduated with a 3.5 GPA. His real dad was a no-show then, too.

“The pain drove me to become a better man for my family, my mother, my sister, and made me determined that when I have children, I will give them everything I never had, most importantly a father who is in their lives,” he says. “My children will never know that pain, or have that look on their face, that me and my sister had that day.”

PRESSURE IS SOMETHING that rouses this 6-3, 254-pound linebacker of the four-time champion SoCal Coyotes. After becoming Bemidji State’s fourth all-time tackler, he has put up high marks in NFL and CFL tryouts, and earned Defensive Player of the Year In two different developmental leagues before he found the warmth of the Coachella Valley, and America’s #1 Developmental Pro Football Program.

In the Coyotes’ feared ‘Darkside Defense,’ Young played in four games last fall, and swiftly put up 10 sacks, 15 tackles for loss, and an interception. “He’s too fast to block with a lineman, overpowers running backs, is quicker and stronger than the tight end, and he’s smarter than your quarterback,” says Coyotes head coach J David Miller. “He’s a monster, to put it mildly.”

In the Coyotes dominating championship win over Inglewood, Young was 60-caliber rounds from the blistering Darkside cannon, coming from all angles and able to play any down-line or linebacking position. Assistant head coach and defensive coordinator Shane Helms dialed him up from every blitz in the Coyote playbook, provoking  more, more, more pressure down the throats of the gasping Inglewood o-linemen. The entire Coyote game plan against the Blackhawks? To keep their former CFL quarterback Kyle Parrish in a perplexed, non-throwing position, as in vertically upside down.

The Coyotes sacked, tackled, knocked down or bounced Parrish off the unforgiving turf a record 21 times, and the scowling Young was at the center of the torrential carnage. In three games against the once-mighty Blackhawks, the unblockable, unstoppable Young had seven sacks, and 11 tackles for loss.

“Pressure,” smiles Young, “is something I understand.”

YOUNG’S TEDDY-BEAR DEMEANOR off the field is smoother than the Isley Brothers , not surprisingly his favorite band. Those close to him know a young man who would rather have tacos and enjoy a real conversation, usually centered around faith, family and football, than waste time on social media or video games.

On the crowded racetrack to manhood, Young credits the Coyotes leadership program for not just changing his tires, but fixing his alignment. “If you apply yourself as a Coyote, these coaches, this staff, is a modern-day miracle,” he says. “I’m growing spiritually, I’m a very targeted young man. I’m breaking out of my shell, and every day is a fresh start.”

His biggest takeaway? “Coach reminds us that if it’s not from the Word of God, you’ve got no chance,” he says. “So I hang on to Philippians 4:13. I truly believe I can do all things through Christ who strengthens me. It boils down to me. Good choices. Accept your calling. Be a man. No excuses.”

WE ASKED GARY YOUNG FOR 10 THINGS nobody knows about him. His answers were fresher than the basil and tomato in  a Chicago deep-dish pizza. We hope a slice or two inspires you.

HEADQUARTERED in Southern California’s Coachella Valley, the SoCal Coyotes are a national, faith, family and football organization dedicated to restoring hope in personal lives, families and communities.  With priority on faith, fatherhood and family values, the Coyotes have been recognized for “Building Champions by Building Men.” Visit www.thesocalcoyotes.com, and learn why the Coyotes were named ‘America’s #1 Developmental Football Program’ by The Football Educator, operated by former Denver Broncos GM and two-time Super Bowl winner Ted Sundquist, by clicking on ‘What We Do.’

ON THE FIELD, 70 PLAYERS EACH YEAR earn the distinction of ‘Defending the Shield’ in the uniform of the SoCal Coyotes. Many will earn a shot  with NFL, CFL or AFL opportunities, or graduate into business careers. Off the field, more than 30,000 Coachella Valley youth annually participate in Coyote Leadership Training and receive published Coyote Leadership Curriculum.

THE SOCAL COYOTES raise funds and donate thousands of dollars annually that affect every community they touch. Coyote programs reach thousands of youth through coordinated efforts with numerous local charitable and civic organizations, including Boys & Girls Clubs, the YMCA, the Desert Strength Academy, the Boys & Girl Scouts of America, and Rotary International.