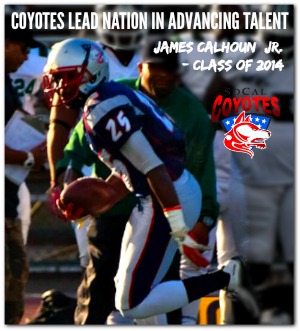 (INDIO) – In a single week recently, when former SoCal Coyotes James ‘The Human Highlight Film’ Calhoun Jr. returned a kickoff for a touchdown in the Indoor Football League, and running back Dylan Peebles signed with the Cleveland Gladiators, their names joined a rain of talent that has thundered from America’s #1 Developmental Pro Football Program™.

While the Coyotes continue building their NFL-worthy platform, it’s notable to witness their progress in developing human potential. The short list playing indoors right now in the Arena leagues doesn’t include the NFL and CFL tryouts and training camp opportunities of dozens of players ‘on the cusp’ of a professional breakthrough.

Coyotes have been in camp with the Arizona Cardinals, San Diego Chargers, Houston Texans and Cleveland Browns.

Last year, 16,175 college football players were eligible for the NFL draft. Only 256 of them were drafted. When it comes to playing professional football, ‘long odds” are an understatement. Americans have a better chance of being struck by lightning (1 in 12,000), or being audited by the IRS (1 in 175.)

But for all the potential exposure, for all the time and commitment given by these players to the sport, only 1.6-percent of seniors will play at the next level. Standing out from the crowd and impressing a scout is hard enough, but for borderline players, or those from smaller programs, getting in front of one may be even harder, if not impossible.

“The Coyote program delivers men, not boys,” says head coach J David Miller, who saw a dozen players from his 2016 roster earn tryouts at the next level. The Hall of Fame, three-time coach of the year describes the Coyote organization as “a conveyor belt to manhood,” where players are required to live by a code that is ‘Above the Line’ – driven, skillful, intentional, and on-purpose.

“Our men understand chain-of-command,” Miller says. “They don’t complain, blame or make excuses. They have a flight path on and off the field. They are dependable, trustworthy workers, respect women, honor their obligations, pay their bills, and are intelligent with social media.
“In one word, they’re employable.”

Indeed. Quarterback Nate Lewis, the Coyotes 2012 National Player of the Year, who still holds club records with 10,027 career yards and 98 touchdowns, was the team’s first pro signing when he appeared with the San Jose Sabercats in 2013. Lewis, the Coyotes original quarterback from 2012-14, today is a Renova Solar executive. Like many Coyotes, he earns his living in the Coachella Valley, where he raises a family, pays taxes and makes the desert a better place.

“Coyote players earn the stripes on their sleeves,” says team president Don West Jr. “We reinforce that football is a privilege, not a right. Our young men are fully grounded, and understand their role in the world. It’s the choices they make as men, all day, every day, that count.”

Playing for the Coyotes, however, doesn’t guarantee next-level success.

“To paraphrase (Florida State legend) Bobby Beathard, it’s not our job to get a player signed by an NFL, CFL or indoor team,” West says. “It is our job, however, to provide them growth opportunities to become game-ready, with the film to prove it, and to challenge them to live a life that never needs an apology.”

Now entering their 10th season, the Coyotes rely on a revolving door of talent that has earned four championships, two undefeated seasons, and record-shattering success. Will a big decline ever come?

“Depends on how you define ‘decline,’” says Miller, who insists the real value isn’t found in football, or measured by wins and losses.

“Right after Dylan Peebles signed with Cleveland, he was texting at midnight sharing about how his faith is exploding and transforming every phase of his life,” Miller says. “Bottom line, if you’re in the Word of God, you’ve got a chance. Old things are passed away, all things become new. ‘Faith, family and football’ isn’t a bumper sticker here. It’s a power source that makes anything possible.”

The Coyotes open their 2017 season September 2 at their Shadow Hills home against the California Sharks. Kickoff is 1 p.m.