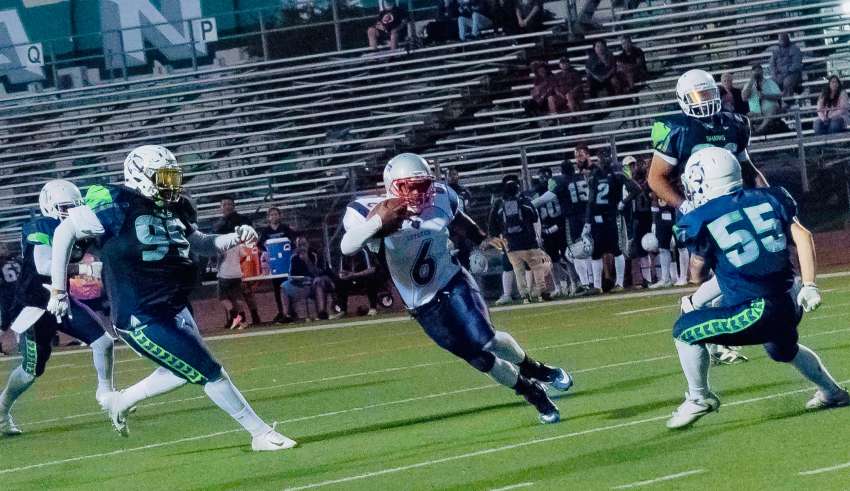 A strip sack in the game’s first minute resulted in the first Coyote touchdown, which set the tone for a dominating defensive performance. After losing their first game in two years a week before, the Coyotes came out of the gate quickly and jumped to a 31-0 halftime.

The chip on their shoulder was evident. Defensively, Coyote veterans Jake Sheffield, Gary Young and Will Hoglund punished California ball carriers and quarterbacks. Rookie defensive backs Marquan Holloway, Brandon Cole and Juvi Roberts had their best performance of the season, and Roberts had his first interception of the year.

In his second start at quarterback, Ridge Turner directed three scoring drives. Late in the game, Dominic Houghton saw his first action at quarterback. The rookie engineered an eight-play drive, capped by a scoring strike to Robertson.

The Coyotes improved to 2-1 on the season. They benefit from a bye this week, before returning to action Sunday, October 14, at 2 p.m., at Shadow Hills Stadium.

DFI is the first turn-key franchise platform to develop elite athletes who are attempting to thread a needle of opportunity. The league refines and showcases player skills through trademarked processes similar to the NBA’s D-league and MLB’s minor-league systems. DFI franchises share scalable brands, policies and procedures, verifiable data, and deliver measurable results.

The vision of DFI is to establish one of the most internationally respected and sustainable professional American developmental football leagues that is both attractive and rewarding for players, investors, partners and fans.