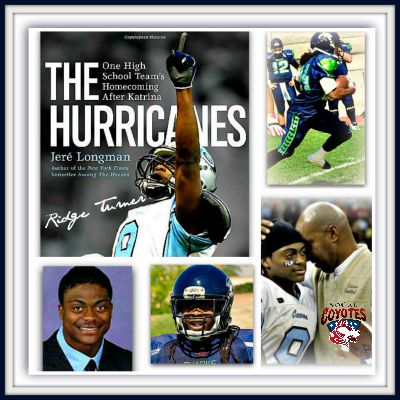 (PALM SPRINGS) – Ridge Turner is no stranger to life’s hurricanes, or the teeth-clenching hope it takes to survive them.

The humble 6-1, 210-pound CFL prospect – who turned a pair of low 4.4 40s for Edmonton and Winnipeg in recent workouts – has joined the SoCal Coyotes – America’s #1 Developmental Football Program – in his relentless football sojourn that neither abandonment, misfortune or natural disasters has been able to stop.

From birth, his odds were grim. Under ‘father,’ his birth certificate is blank. Raised by guardian Elouise and ‘Uncle Blue’ since the age of six, he overcame a tumultuous childhood to become the prize of every college recruiter in the nation – as one of the most sought-after, three-star Rivals.com prospects to ever burst from the Louisiana bayous.

Under head coach Cyril Crutchfield, who survived the storms on the roof of a school industrial arts building, the soft-spoken Ridge Turner found a father-figure whose love and nurturing “put the ‘us’ back in trust,” he says. That bond, forged by vulnerability and risk, was all the opportunity Turner would need.

Living out of a leaky FEMA trailer, Turner produced numbers that are still Louisiana legend, the subject of a New York Times series and eventually a best-selling book, where he adorns the cover.  As a starting quarterback, Turner went 26-2 and won two straight state titles. His ridiculous 5,549 yards as a junior remain a state record.

As a senior, Ridge finished as the All-State MVP with 175 career touchdowns. In the state championship, his 80-yard interception return for a touchdown and the Hurricanes 62 points and 576 total yards were Superdome high school records. Turner’s staggering 12,751 yards of total offense are second in state prep history. In track, he still holds records in the 4×100 relay and the 300-meter hurdles.

Turner insists his onslaught of record-breaking performances stem from a simple belief: That every man who ducks responsibility because of chaos or confusion in his life prevents himself from changing it.

“You must believe in your heart you are destined for greatness at something,” says Turner. “Everybody has an ability to do something great. You have to be mentally tough.” But in high school, he admits the silence between games was deafening. “It’s hard, and yes, it gets lonely,” he says. “But me and God are straight. I kept my strength in Him, in me, in my dream. Someway, you gotta find strength to keep grinding. You gotta keep believing that God knows you by name.”

Such courage and determination, he says, kept him from the streets, where fatherless homes account for 70 percent of all prisoners and high school dropouts. Recruited by powerhouses like Tennessee,

Florida, Alabama and West Virginia, grades left him toiling at junior colleges Northwestern State and Mississippi Delta. He settled on West Alabama, where he could play both ways, before finally and officially converting to full-time cornerback, where pro scouts place his future.

This spring, CFL scouts directed him to the California Sharks for extended pro playing time. Turner sold everything he owned, bought a plane ticket, came to California, and put up showcase numbers with the Sharks under the tutelage of interim head coach Shane Helms. He had diving interceptions in every game, returned kickoffs and punts, and doubled as a running back in the league championship, where he scored the game’s first touchdown.

When the SoCal Coyotes offered him 13 more games this fall, he leaped at the opportunity. “We believe in Ridge,” says head coach J David Miller. “All Ridge needs is identity and validation, and he has both here. Half of the kids he played with in high school are in the NFL. Ridge had a longer route, but he knows he’s better than all of them.

“He will get his shot. He’s a survivor. Just like he’s conquered his past, he’ll tackle his future. When you have his passion and purpose, faith finds a way.”

The first thing Ridge did as a Coyote? He volunteered with local district attorneys and Desert Strength Academy, nurturing the valley’s at-risk juvenile youth, sharing his own message of faith, and encouragement.

Meanwhile, he can’t wait for the Coyotes season opener.  In a violent game played by dangerous men, the world of football might be Ridge Turner’s safest refuge.

“As long as I’m playing football,” he smiles, “there’s hope. When you’ve already lost everything, you’ve got nothing to lose. When I’m playing this game that I love – man, I’m a happy man. Everything is possible.”

NAMED AMERICA’S #1 DEVELOPMENTAL FOOTBALL TEAM, the SoCal Coyotes will seek their 50th franchise victory when they open their seventh season this weekend on the road against the San Diego Stallions. Be sure to visit www.facebook.com/thesocalcoyotes.