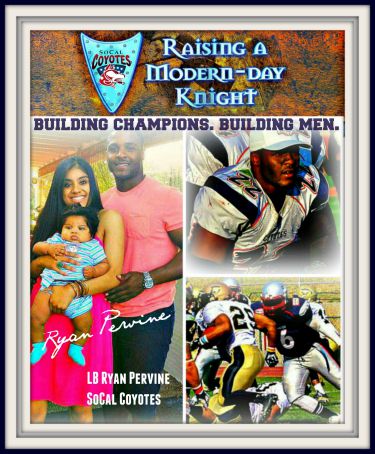 (PALM SPRINGS) – SoCal Coyotes captain and star linebacker Ryan Pervine still remembers his ‘senior night’ game at Lawrence Central High School in Indianapolis, when he repeatedly walked across the track, stared into the crowd, and looked everywhere for his dad.

Pervine, also playing running back that night, violently pounded the defense for over 200 yards and two touchdowns, angrily and openly venting pain and frustration from a wound that only boys whose fathers have been ‘missing in action’ understand.

Such wounds have been insatiable rocket fuel – need for acceptance, need for approval, need to be understood – that burns with desire inside the heart of this hard-hitting, 6-1, 230-pound pro prospect, who has had one visit to the Arena Football League – and is ready for “whatever God has next.”

Pervine has become the Coyotes de facto ‘Minister of Defense,’ whose hell-rattling, pre-game, team prayers are followed by his thunderous teeth-rattling tackles. “Ryan is a ‘stand-up’ hitter,’” says head coach J David Miller, “because when he hits you, the whole crowd stands up.”

Don’t be fooled by his mischievous grin or effervescent personality: This no-nonsense intimidator has 161 solo stops since he became a Coyote in 2013, and averages four solo tackles for loss per game. He has led the ‘Darkside Defense’ in total tackles three times.

Pervine discovered the three-time champion Coyotes after a phone call between Miller and his college coach, former College of the Desert skipper Dean Dowty. “Ryan Pervine should be playing on Sundays,” Dowty told Miller on the phone, “but he needs tough love, and a safe place where he can mature. He needs to play.”

Tough love, indeed. Miller and his maverick player, a high school football and track star and college standout, quickly clashed, often chest-to-chest, in what they call ‘passionate discussions,’ as the head coach challenged him to grow up.

“Great leaders like Ryan can’t hide their hearts,” says Coach Miller. “Young men are delicate. You don’t want to kill their engine. They just need a rudder. Ryan has learned the power of his influence. To get the respect you crave, you have to be respect-able, in every area of your life.”

The right ingredients were all there, thanks to his God-fearing and hard-working mother, Senobia, who works in victim assistance for the Indianapolis Police Department. Ryan grew up alongside older sister Morenci and younger brother Chad. He started playing football at age four.

Football got bigger and bigger, as time with his father grew smaller and smaller – before disappearing entirely around age eight. His Uncle Fred, a deputy chief with the Indianapolis Fire Department, filled in admirably, and with cousin Jordan, the trio became inseparable. But Ryan always felt cheated by the vacuum left by his dad.

“I put up walls – I don’t let men come into my life,” admits Ryan. “Coach Miller and I got after each other pretty good. Then he’d put his arms around me and tell me he loves me. He refused to go away. It felt amazing. I started listening. I started understanding the definition of family and team and singleness of purpose. It’s been a complete life-changing experience.”

Today Ryan Pervine reflects the tip the Coyote sword: Young men engineered with moral conviction, who thirst for spiritual significance, who have the heart and will to honor God. From training camp forward, the Coyotes are impressed to be ‘better fathers, better husbands, better men,’ to seek and maintain gainful employment, to love and honor the women they pursue, and taught that fatherhood is a timeless, heroic endeavor that calls forth bravery and sacrifice.

The fatherhood issue, for many players, is their deepest wound.

“The best way to bury your past is to build your future on top of it,” says Coach Miller. “When life throws bricks at your feet, use them to build your house. As our guys become young fathers, they realize God wastes no pain. The windshield is always bigger than the rear-view mirror.”

Ryan is a modern-day knight, and now is raising one of his own. He’s a brand new father to son Gabriel Christopher, and protector of bride Maira Valle. “She is my queen,” he smiles. “I run to open her doors.”

“Not just to the general public, but to ourselves. I’ve never been a part of anything like this. We love the Lord, we love each other, and we love this game.”

Pervine’s emergence as not only a football player and leader of ‘The Darkside,’ but also as a spiritual mentor to his young teammates, has been startling – even to defensive coordinator and assistant head coach Shane Helms.

“He’s what the Coyote organization is about,” Coach Helms says. “Ryan exemplifies the whole program here. I’ve never told him this – but when I see him with his family, his smile is bigger than the one I see when he’s playing the game he loves.

“Ryan is doing what he loves, and it’s genuine love, flowing in every direction, on and off the field,” Coach Helms adds. “My uncle used to say, ‘Live the life you love, love the life you live.’ Ryan Pervine is at that place.”

Cinthia Paiz, the Coyotes director of operations, has watched Ryan mature into not only a locker room leader, but also a late-night, telephone prayer warrior. “He can sense the pain that’s going on in the lives of others,” she says. “Hurting players tell me they get surprise, unexpected phone calls from Ryan, and more than once, he’s prayed them through the night.”

“’Defend the Shield,’ to me, is that I simply believe every word of the Bible,” says Pervine. “Not by strength, not by might, but for the glory of God. The Lord put us here for a reason. To build relationships, to build bridges that we never thought were possible. None of us ever thought we’d be together, or stand as a band of brothers who deliver a message of hope.”

And, boy, does he have a message for the incoming 2015 fall class of Coyote rookies.

“Are you willing to stand for Christ – and win the moment?”