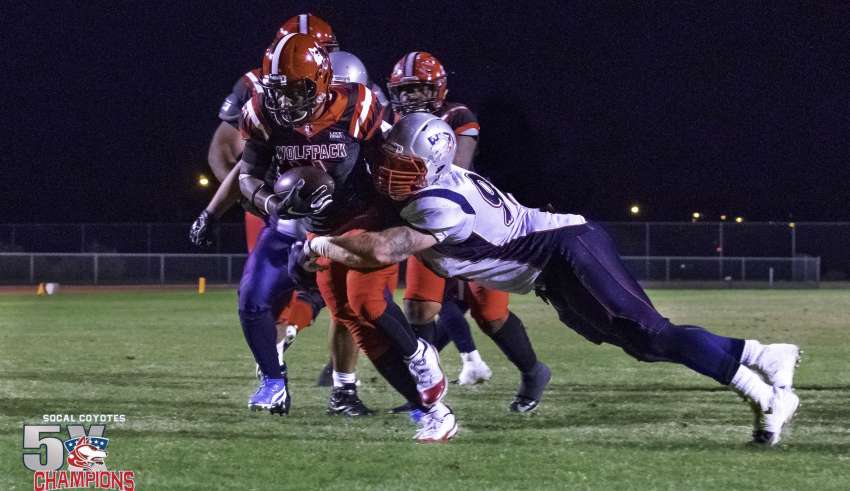 (INDIO) – For weeks, the SoCal Coyotes showed obvious flaws, but for the most part, found ways to escape.

The Coyotes ran out of answers Saturday night in a 40-18 loss to the undefeated Cali Wolfpack, their second to their newest rival in Developmental Football International.

The Wolfpack, who have a bye this week, finish the regular season 6-0 and will be the top-seed in the DFI playoffs. The Coyotes fall to 3-2 – and close out the regular season this Saturday on the road against the Bulldogs of San Diego.

“Victory has a thousand fathers, but defeat is an orphan,” said a grim J David Miller, Coyotes head coach, who shouldered the blame. “I take full responsibility. The Wolfpack showed us why they’re undefeated. They had a great game plan, they schemed us well, and they came in here to win.

“Our glaring shortcomings were exposed.”

Still, the Coyotes led on booming field goals from kicker Luis Castellanos through most of the first half, and with four minutes to play, it was still a one-score game. A pick-six and a punt block led to two flash scores for the Wolfpack, to put the game out of reach.

Coach Miller said he remains confident that his coaching staff will make corrections this week before their season finale in San Diego, and most certainly by the DFI playoffs, where anything can happen.

“Our locker room is fine,” Coach Miller said. “We’re a very young team, with a lot of growing up to do. There’s no pointing fingers. Our whole program is about accountability, to God, and each other.

“We’re all going to take a hard look in the mirror, and get ready for San Diego.”

DFI is the first American developmental football organization engineered to cultivate the annual flow of 16,000 Division I, II, and III prospects. It is the first turn-key franchise platform to develop elite athletes who are attempting to thread a needle of opportunity in their personal and professional lives.

​The league plays by NFL rules, with NFL-style uniforms, and oversight from former NFL executives, coaches and players.  ‘Above the Line’ leadership development is a Chief Cornerstone of DFI, where becoming a “Game-Ready Player’ also requires prospects to be a ‘Life-Ready Man™.’