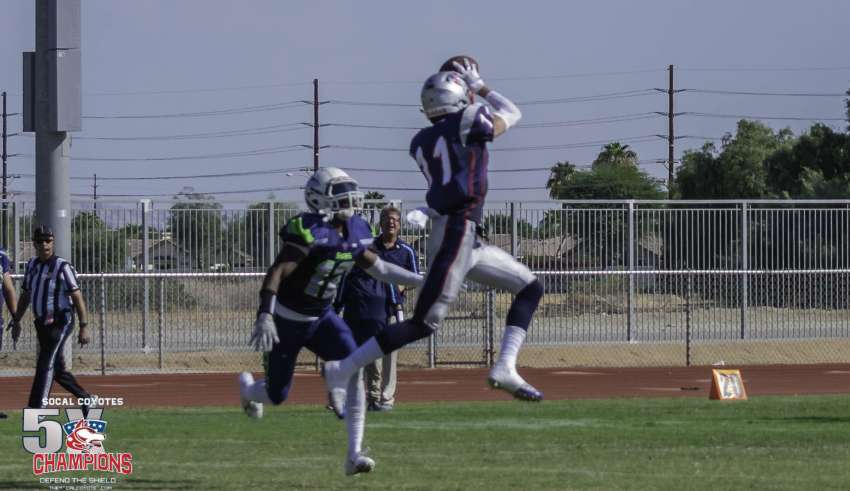 (INDIO) – Only nine seconds remained, and the visiting California Sharks trailed the five-time champion SoCal Coyotes 22-20 – but were just 14 yards away from stealing a hard-to-come-by victory halfway through this Developmental Football International (DFI) season.

A huge crowd sat perched and waiting on the edge of its collective seat, with no nails left to bite.

Fumbles, interceptions, safeties, touchdowns, missed field goals, two-point conversions – heck, there was nothing pretty about this game, but the players – oh my, these players! – were one-upping each other on every possession, and having more fun than a mud fight with the sprinkler on.

For 59 minutes, it was anyone’s guess who would win, or how.

The California Sharks took the final snap, because somebody had to, and the quarterback took off – with a pack of Coyotes in hot pursuit. He rolled left, peeled back to his right, then back left again, dropping ever deeper.

Officially, the game was over, the outcome dangling for as long as his young feet could keep it alive.

A final heave rocketed the ball as high as it went long, silhouetted against the San Jacinto mountains, which looked like melting chocolate under the fading desert sun.

There we all were, in this Digital Age of Inattention, where head-down millennials walk texting into light poles and share attention spans with goldfish, caught up in a wild, raucous, old-fashioned, Sunday afternoon hoe-down, far, far bigger than any meme or screen-shot or emoji could possibly describe.

You had to be there.

How about Rashad ‘The Franchise’ Roberts, who caught a 49-yard touchdown to give the Coyotes a second-half lead, then plucked an interception out of the hands of his defensive tormentor and raced 54 yards for a game-winning, fourth-quarter score?

Or those thrilling, acrobatic catches from rookie receivers Derrick Anderson and Taylor Pope, who shredded and breaded a resilient California secondary?

Or quarterback Ridge Turner, who literally played his guts out while passing for 244 yards and rushing for 40 more? With minutes left in the game, the Louisiana legend had to be dragged to the sidelines, and left it all on the field, heaving on all fours – but not before his hand cannon produced three touchdowns, and he selflessly contributed three huge tackles on defense.

Then there was defensive end Jake Sheffield, who added four more sacks to his ridiculous 70 all-time – and played the entire game in the trenches both ways. Of course – it was Sheffield, too, who forced the fumble that led to the go-ahead score.

When you’re caught in a battle of wills, it helps to bring your own. Coyotes linebacker Will Hoglund stripped and flipped the most daring Sharks to lead all tacklers. He was nearly outdone, however, by rookie teammate Silas McPhee, who might have the name of a poet but came with more reason than rhyme. McPhee delivered a litany of inspirational solo stops, added a critical drive-killing interception – and taught the Sharks that the best comeback from being the victim of a ferocious peel-back block is to, well, go win the game.

Kicker/punter Luis Castellanos might have missed a field goal he demanded to kick, but redeemed himself with a booming, half-the-field punt that rolled dead at the two yard-line, and hopelessly pinned the Sharks’ fins to the wall when time was almost as precious as the fleeting oxygen in the humidity-free air.

So, we digress, to the game’s final and desperate rainbow. How fitting that a dozen Coyotes and Sharks would leap, together no less, high in the air, with at least half of them touching the ball as the crowd roared and coaches clipboards soared before it finally – finally – FINALLY – skittered harmlessly to the turf.

Game over. Coyotes win. With big ups to the Sharks, who never gave up, swam back into contention time and again, and nearly pulled off a blockbuster bigger than JAWS.

It took a while to sink in. Players mugged and hugged and prayed and stayed on the field for as long as they possibly could, already telling tall tales of this play or that play, memories they will likely still be telling grandkids a few decades from now.

“Now that was better than NetFlix,” quipped a family leaving Shadow Hills Stadium, who realized it’s hard to beat a fun day in the sun that includes actual people and conversations and my goodness, at halftime, even the Cielo Vista Charter School marching band.

It was a coming-of-age party for DFI, which promises ‘Game-Ready Players, Life-Ready Men.’ About 70 of those young men delivered a contender to remember on this post-card perfect Sunday afternoon.

Every neighborhood should be so lucky to have a Sharks or Coyotes to call their own, which is exactly the plan when DFI Commissioner Joel Williams predicts 100 teams in the next 60 months.

With classics like this one, it’s not a matter of if, but when.

The vision of DFI is to establish one of the most internationally respected and sustainable professional American developmental football leagues that is both attractive and rewarding for players, investors, partners and fans.

DFI is the first turn-key franchise platform to develop elite athletes who are attempting to thread a needle of opportunity. The league refines and showcases player skills through trademarked processes similar to the NBA’s D-league and MLB’s minor-league systems. DFI franchises share scalable brands, policies and procedures, verifiable data, and deliver measurable results.