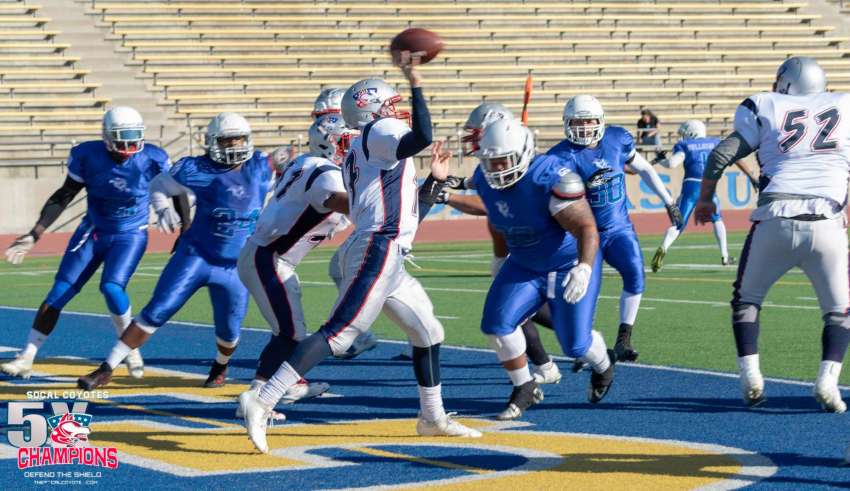 (SAN DIEGO) – IT WAS A SNAP-CHAT-PERFECT Saturday afternoon, the kind that makes people who don’t live in Southern California sure wish they did. Quarterback Dominic Houghton was snaking down the I-15 freeway near Escondido, leaving the canyons for the coast, with no time to notice there was barely a cloud in the sky.

Today was supposed to be his day. He had a lot on his mind. And, for the first time all year, he was late.

A year ago, Dominic never dreamed he’d land as a player in Developmental Football International for the SoCal Coyotes. After putting up productive prep numbers, Houghton and his career wound up buried at the bottom of the depth chart at New Mexico Highlands. Determined to vanquish the stinging criticism of college coaches, Houghton had decided to give football one last shot.

BORN OF OPPORTUNITY, nurtured by advocacy and kept alive by ample resources, a young quarterback’s ambition can snowball if massaged correctly. In developmental football, the intangibles are rarely innate – and the Coyotes are poised to teach them. The Coyotes believe you can become a quarterback in that heightened sense of the word—in the way that Nate Lewis, Michael Karls, and Jacob Russell are quarterbacks – through an accumulation of experiences.

“You can’t force it on the kid,” says head coach and Run ‘n’ Shoot guru J David Miller, who has seen his share of quarterbacks since 1987. “If they don’t really love it, they’re not going to be doing the extra work and doing all the stuff that it takes to get really, really good.”

One practice at a time, Houghton slowly worked his way into contention on the depth chart, throwing thousands and thousands of balls in a cathartic overhaul of mind and spirit. Every Coyote practice ends with scripture and prayer on bended knee, with a challenge to each man to get better on the inside, too.

JUST GETTING TO 24 YEARS old in life comes with plenty of Firsts. First Date. First Car. First Job. But Houghton’s First Start at Pro Quarterback was about to become his Last, if he couldn’t somehow get out of this traffic and get to San Pasqual Stadium, where The Bulldogs of San Diego were about to be unleashed against his Coyotes.

‘… With bombs bursting in air,’ Houghton was still pulling his jersey over his pads. Moments later, when the Coyotes won the toss and deferred, he was the happiest cat in the doghouse. He loosened up, slung a few on the sideline, and before you could say three and out, Dominic Houghton was buckling his chinstrap, waiting for direction.

Rip 60 Z Slide, he was instructed, and away he went, trotting out to a huddle full of wide eyes and optimism.

THE FACT THAT HOUGHTON was even starting a game summed up the 2018 season for the Coyotes, who had built their offense piece by piece around the unique abilities of Michael Karls, the second all-time leading passer in franchise history.

The Coyotes, in 11 seasons and 84 wins, had averaged 40-plus points and 500 yards total offense per game. When Karls went down in Week One with a season-ending torn ACL, SoCal’s fire-breathing Run ‘n’ Shoot offense went with him.

Next up was West Alabama’s Ridge Turner, a cornerback turned quarterback who Miller calls ‘Mr. Everything’ – a fearless warrior who on sheer talent alone valiantly went 2-2 in replace of Karls.

From the safety of the sidelines, Houghton watched Turner’s trial by fire. If he learned anything, it was that holding the football in the Coyotes’ fast-break offense is like holding a live grenade – it’s going off, on one end or the other, for better or worse. Personal welfare and career longevity become critical factors in teaching a young quarterback to get the ball out on time.

UNTIL HUGE BODIES ARE FLYING around the backfield, quarterback is a difficult thing to teach, because you can’t simulate the game environment – where angels fear to tread – in an anesthetized practice setting. The Run ‘n’ Shoot demands its quarterbacks know tendencies, read coverages, go through progressions and get rid of the football in less time than it takes most people to swing their legs out of bed.

Turner was a high school quarterback, and a phenom at that – he’s still the all-time, single-season yardage leader in Louisiana history. But expecting even Turner to master the Run ‘n’ Shoot overnight was like asking him to parachute into a live performance of the Los Angeles Philharmonic Orchestra and hit every note, mid-symphony.

Case in point: In two wins, Turner tossed sizzling touchdowns and made plays with his feet, spinning gold from straw. In two losses, the very same Coyotes stalled in the red zone 18 times without points, blowing themselves to bits like a real-life Wile E.

As the head coach, Miller shouldered the blame for all the fumbles, sacks, crazy turnovers and penalties – all the things that happen once a team’s hair-trigger timing goes out the window.

“The best time to fix a hole in the roof is when the sun is shining,” said Miller. “We asked Ridge to do it in a downpour. Everybody in this organization respects and appreciates how hard Ridge competes.”

Regardless, Miller refused to rush Houghton, who was smack in the middle of a physical, spiritual, and mental do-over, and had found an advocate in Michael Karls.

“Quarterbacks are like horses,” Miller told Karls. “Break their rebellion – but not their spirit.”

Miller knew he was preaching to the choir.

SO TO HASTEN THE LEARNING curve for Turner and Houghton, Miller promoted Karls to offensive coordinator – and let Karls call their plays. Miller’s intention was to help Turner survive and keep Houghton on schedule, while stretching Karls toward becoming a great coach.

Thankfully, it wasn’t too much of a stretch for Karls – offensive coordinator is his day job, for Xavier College Prep, which is now deep in the state playoffs.

“Slow down, be patient, use your assets, make the easy throw, hit the open man,” Karls told Houghton, day in, day out.

Miller couldn’t hide a smile – he’d been preaching that to Karls since 2013, when the Palm Springs superstar burst into the Coyote organization as a hot-shot rookie. That year, Miller sat Karls behind Nate Lewis, the Coyotes all-time leading passer. To get playing time, Karls covered kickoffs and played slot, and learned the Run ‘n’ Shoot from the inside out before he became a full-time starter in 2014.

All coaches are not created equal, which is why in 2015, Miller brought in Mouse Davis, the godfather of the Run ‘n’ Shoot and the modern four-wide offense, to tutor Karls.

“Mouse taught Mike how the really good coach will show you through repetition how you’re better – and convince you you’re better with every throw,” Miller says. “That’s especially important for our quarterbacks, because we know the best quarterbacks have a confidence that’s not really related to anything tangible. They just believe.”

IT’S IMPOSSIBLE TO UNDERSTATE Karls’ mastery of Miller’s offense. Among his team records are 16 300-yard games, five 400-yard games, and (gulp) three 500-yard games. In a single playoff game in 2014, Karls put up 11 touchdowns. In one game.

Over the next four games after The Injury, the Coyotes had only 10 offensive touchdowns. Total.

Miller desperately needed Karls to pour some of his magic into Turner and Houghton. Back under the lights of the practice field, they both improved under Karls’ tutelage, though all would agree some practices were excruciating. After one particularly rough night, Miller jokingly texted Karls a quote from the movie Seabiscuit.

You know, you don’t throw the whole horse away just ’cause he’s banged up a little.

Karls didn’t reply. Meanwhile, Houghton just wanted to do anything to help the team. While waiting his turn at quarterback, he played slot, and earned the respect of the veterans by covering kickoffs on special teams. Just like his mentor.

Finally, in the last game of the regular season, Houghton’s big day arrived.

“There’s only two kinds of quarterbacks in the world,” Miller said. “One gets better when you put him in, and one gets worse.”

RASHAD ‘THE FRANCHISE’ ROBERTS, he of 96 career touchdowns and 5,000-plus yards receiving, broke wide open and sat down in the middle of San Diego’s zone defense. Houghton’s first pass skipped off the turf three feet short.

“That’s OK,” yelled Karls, grinning. “You recognized it! Keep feeling it! Trust me, you’re getting it!”

Series by series, throw by throw, Houghton steadily improved. There was something achingly beautiful about the process. As the game wore on, a season’s worth of hard work begin to click. Quick reads. Ball placement. Confidence in his receivers. Communication, everywhere. Even the plays got in on time.

There were actual drives that started in one end zone and ended in the other. Everyone got in on the act. Ross Robertson snagged tightropes down the sideline. Juvi Roberts caught bone-rattling first downs in traffic. Derrick Anderson and Roberts caught touchdowns. Jordan Warford slashed in for another.

A resurgent energy on the sideline was evident – even the big men rejoiced. The offense was driving. The heroic Darkside Defense, high-fiving. “It was like the whole bench breathed a sigh of relief,” said defensive end Jake Sheffield, when everybody realized that Dominic Houghton could hold his own.

For the most part, Miller stayed out of it, watching admirably as another class of boys became men. Karls had become a coach, too, in every sense of the word. Houghton, who completed 15 of 31 passes for 224 yards and two touchdowns, bubbled like Dom Perignon. When it was over, a season’s worth of work culminated in a three-hour revival that produced the two most important statistics a young coach and quarterback can hope for – zero offensive turnovers, and a W.

LATE THAT NIGHT, Miller’s phone buzzed on the nightstand. It was a text from Karls, who had fired back his own line from Seabiscuit.

You know, everybody thinks we found this broken-down horse and fixed him, but we didn’t. He fixed us. Every one of us. And I guess in a way we kinda fixed each other too. LOL.

Only God knows now where Dominic’s journey will take him, but his First Steps were all his own.

And the beauty, friends, is the uncertainty of it all.

ABOUT THE SOCAL COYOTES – The SoCal Coyotes are the national standard of American developmental football. The Coyotes non-profit organization provides elite athletes a professional environment that refines and showcases their skills through trademarked processes similar to the NBA’s D-league and MLB’s minor-league systems.