Home SoCal Coyote News Let’s Hear it For the Poise 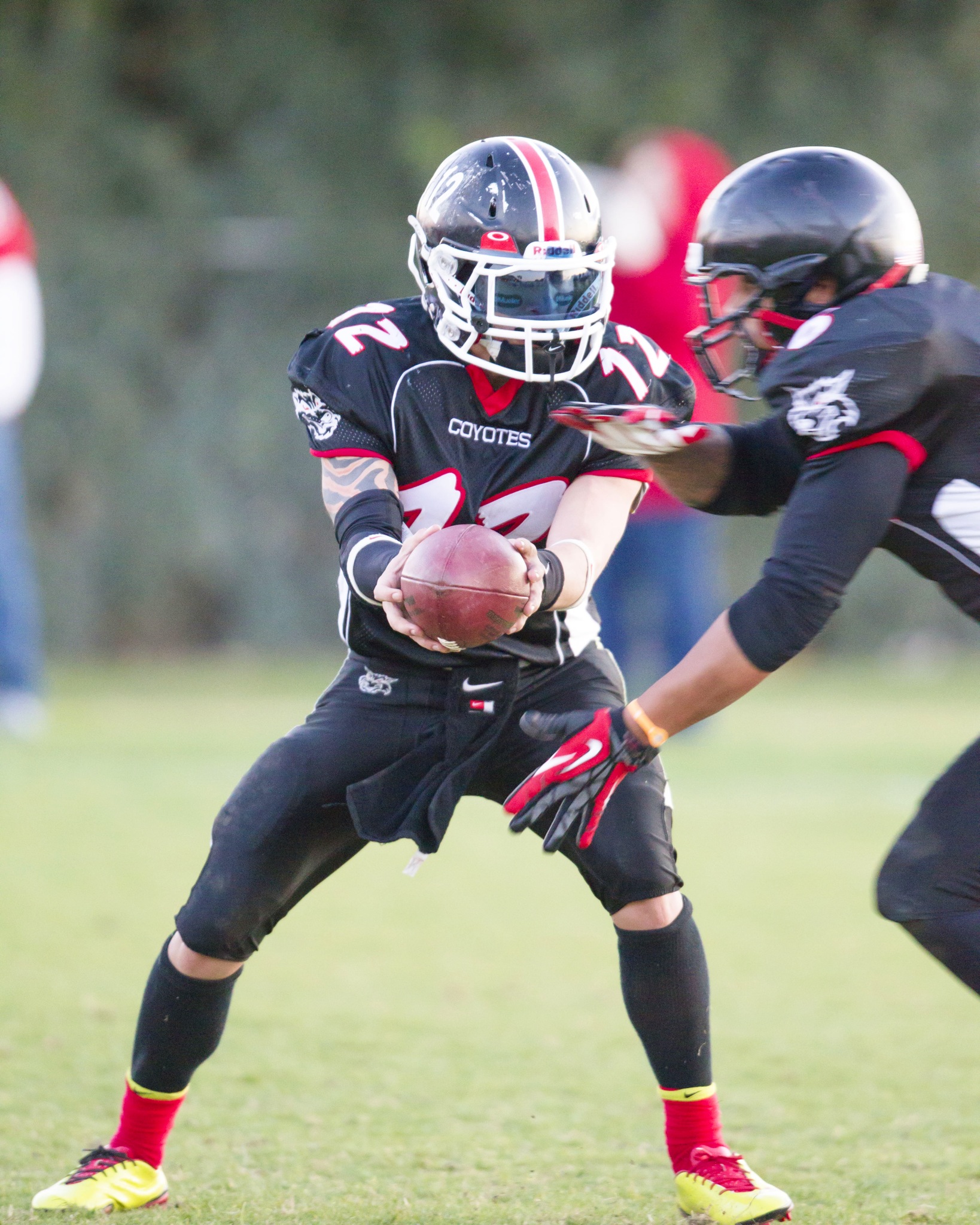 Mondo Delgado Jr.’s turnover-riddled night did little to shake the faith of his teammates, his coaches, or himself …

(PALM SPRINGS) — Before we break down the beat-down of Mondo Delgado Jr. last Saturday night — before we hold it up to the sun, shake it, smell it, replay its every snap and measure it against the early big-game debuts last year of Coyote superstars like Nate Lewis or Rashad Roberts or David Cathcart — we should probably tell you that one person won’t be listening:

As his father, Mondo Delgado Sr., says of the hype and counter-hype that his son has faced his entire career: ‘He dismisses it.” This is one of the beauties of Mondo Delgado, and explains why the Coyote organization was not fazed by his horrific six-turnover debacle against the Vegas Trojans.

Because Delgado himself was not fazed.

For 55 minutes, Delgado gave footballs away to his opponent. He drove his team 96 yards after the opening kickoff, then threw an ill-fated 9 route in the flat — to the defense, who returned it for a pick six to give the veteran Trojans a lead they would never relinquish.  The young rookie then coughed up four more fumbles and dropped or bobbled snaps from center Brian Gollnick like he was catching lit dynamite.

But suddenly, trailing 34-0 — and with the proud Trojans gallantly fighting to give the Coyotes their first shutout defeat in history, it was Delgado who caught fire.  He dropped back with confidence, and shot gorgeous passes to his slots. He made great decisions in the flat and easily out-ran corners to the sidelines with blinding speed. Before you could blink, he hit All-American Demario Brown on an 87 Choice, who rumbled 15 yards after the catch for a touchdown. On the conversion, Delgado rolled out on a 19 Ohio, then dove for the end zone after a breathtaking John Elway-esque spin.

The Coyotes got the ball back, and Delgado picked up where he left off. Calling a Falcon 86, he burst through the defense for a 48-yard run. He rushed his team to the line, and barked out a Dallas 32 to David “The Diesel” Cathcart, who ran through a giant hole untouched. On the conversion, he scrambled all the way to his left on a 19 Atlanta call, then planted his feet and fired a bullet to Brown who was jetting the opposite way in the end zone.

In a flash, the score was 34-16, and fans who had thrown in the towel suddenly couldn’t take their eyes of the Colorado kid. Had the Coyotes recovered an onside kick that bounced off the back of one of their own helmets, SoCal would’ve been within striking distance with three minutes to play and all three timeouts remaining.

The Coyotes, who had been ranked No. 2 by Minor League Football News prior to the game, left the field with two realizations. First, that the top-ranked, undefeated Trojans were now in the driver’s seat to host the Wild West Football League championship game; and second, that they could be utterly confident about the future of the franchise in the hands of Delgado once he figures it all out. It should also be remembered this wasn’t the Super Bowl, but just another regular-season game.

“The kid kept his poise, regardless of how bad it got,” said head coach J. David Miller. “He had a lot of guys in his face. He had a lot of blown plays. There were people in the stands and on the sideline who quit on him. But he never gave up. He kept learning, and kept fighting. In the end, he ignored the score, made some outstanding decisions and showed flashes of brilliance. The challenge with a young player who needs to play in order to get where we need him to be, is that, well, he actually has to play to get there. Every snap, Mondo is getting better.”

When you’ve moved all the way from Denver, Colorado, to play AAA football for the Coyotes, when you are alone in a city surrounded by strangers and apart from your family and friends, criticism is the least of your problems. Delgado never complains about being homesick, though he openly misses his wife (Eva) and family (Levy, age four).  He has been a consummate teammate and stood up to every challenge — not the least of which has been filling the big shoes left by National Player of the Year Nate Lewis.

Ironically, Lewis is now in the same position as Delgado — only now Lewis is a rookie, too, fighting for a roster spot with the San Jose Sabercats in the Arena Football League. Delgado, meanwhile, has been picked to fill the awesome leadership and talent vacuum left by a player who broke every single-season AAA record in the Coyotes Run ‘n’ Shoot attack.

But you have to keep things in perspective.

In case you’re wondering, Nate Lewis had some rough outings, too, during his 2012 season. It should also be noted that in the Coyotes’ first loss against the Trojans earlier this year, Lewis only engineered four more points than Delgado.  Even if you compare him to Andrew Luck or Peyton Manning — who both had three interceptions and two fumbles in their debuts — Delgado’s difficulties weren’t surprising.

In 1998, Manning’s rookie year, he was personally responsible for a team-record 28 turnovers, and his team went 3-13.  The 5-2 Coyotes, meanwhile, still have a shot at the playoffs and a third game against the Trojans — if they can run the table down the stretch and wind up in the WWFL title game.

The departed Nate Lewis, who was a voracious student of the game, seemed to watch film in is sleep. Over time, he had a mental advantage over every defense he faced. Delgado, 21, is still learning to how to flex his cerebral skills along with his incredible physical talent.

The day after the game, Delgado attended church, and by late that afternoon, was asleep alone on a friend’s sofa, with an icepack on a swollen wrist. Earlier in the day, he had talked to coaches, in which he tried to personally take all blame for the Coyotes loss. He pointed no fingers at coaches, or teammates, only himself.

“I take full responsibility for what happened out there,”but frankly, I’d blocked them all out until I walked off that field. I have to avoid stupid mistakes, whether it’s putting the ball on the ground, a bad read, not trusting the offense, or not trusting my coaches or teammates.

“But my father taught me to never give up,” Delgado adds. “I’m still learning. Stick around. You’ll see.”

Miller agrees. “It’s hard to see the beauty of a diamond when it’s still rough,” he said. “But only a real diamond can take the heat, and stand up to the polishing. Everybody wants to be  brilliant. But not everybody can take the beating or the pressure required that makes you shine.”