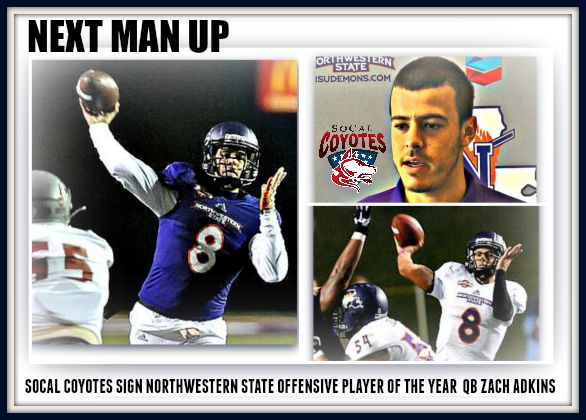 “I’m excited to be a Coyote – this is a great opportunity,” said Adkins, a communications graduate who appeared this spring in the NFL Regionals, followed by workouts with Toronto, Edmonton, British Columbia, Montreal and Hamilton of the Canadian Football League, where he received high marks. “I’m very comfortable in the Run ‘n’ Shoot. I’m here to put up points and win games.”

A 68-percent career passer, Adkins, 6-0, 210, reported to the Coyotes Thursday night and was signed after a two-hour practice, in which he showcased demonstrable command of the team’s vaunted Silver Stretch attack. “He made every single throw, and a little more,” said an impressed Coyotes head coach J David Miller. “His release, touch and accuracy on the deep poco (post corner) stuff gets your immediate attention.”

The Coyotes run the Colt Brennan-era version of the June Jones-Mouse Davis Run ‘n’ Shoot, which Adkins ran at Northwestern. “It was pretty seamless,” said Miller, who confirmed that Adkins will start immediately in replace of incumbent Michael Karls, who was lost for the season Saturday with an ankle injury.

“He’s standing with the likes of (former NSU greats) Bobby Hebert, Brad Laird and Scott Stoker – and that’s a pretty elite group,” says NSU head coach Jay Thomas. “We were very blessed to have this guy with us, and it was only for two seasons. What could Zach have done if he played here all four years?”

Last fall against in-state rival Southern, Adkins completed 30 of 35 passes, including a school-record 19 in a row, with four touchdowns, which earned National Player of the Week honors. He went 17 for 17 in the second quarter, just three shy of the NCAA mark for most in a quarter. He finished 30 of 35 (85.7 percent), which threatened the NCAA FCS record for completion percentage (91.4 percent).

Prior to NSU, Adkins was Offensive Player of the Year at Riverside Community College, where he completed 67-percent of his passes for 2,744 yards and 28 touchdowns, under head coach Tom Craft. He is the son of Riverside’s John and Mandy Adkins.

ADKINS WILL SEE HIS FIRST COYOTE ACTION on August 22, when the Coyotes face the Inland Empire Ryders.