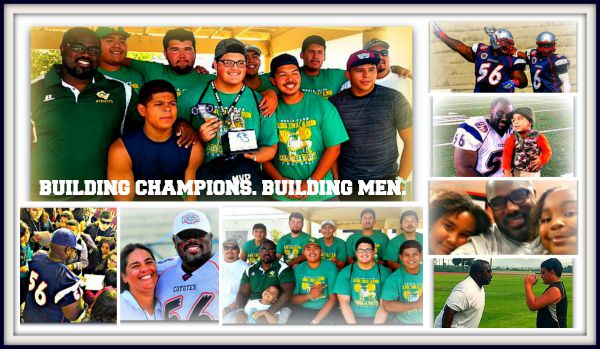 “Being a coach has always been in my blood,” grins the svelte 6-1, 295-pound Cox, a star example of a Coyote program that emphasizes ‘Building Champions by Building Men,’ which guides players through life’s challenges, such as academic and cultural issues, relationships, how to treat women, and especially how to face and overcome adversity.

“It’s exciting to take everything you’ve learned, plant it in the lives of others, and watch it grow,” he says. “Especially as a freshman coach. We are walking each young man into the front door of their lives. They come in at different stages, but my job is that they leave way better than they were, and at a higher level.”

Maintaining balance among football, family and faith is nothing new to this veteran Coyote leader, a father to 12-year-old Haley, eight-year-old Ceyonna, and three-year-old Ezekiel. “Football is what I do, but it’s not my life,” Cox says. “I’m a father.”

Already busy balancing a life of constant growth and reflection, Cox has added the practical application of ‘servant leader’ to his resume as an up-and-coming high school coach.

“It’s thrilling to watch as our players become team captains, then fathers, then dependable community leaders and corporate citizens,” Coach Miller said. “Ced has been determined to use his life to make a difference in the lives of others. Anybody can talk about it, but it takes a man to be about it.”

Cox is a Florida State product who has been with the Coyotes for six seasons, shining on both sides of the ball. After five seasons at nose tackle – and earning 2013 Defensive Player of the Year – Coach Miller converted him last fall to guard in the Coyotes Run ‘n’ Shoot ‘Silver Stretch’ attack.

“You’ve been great at nose tackle,” Miller convinced him, “but believe me, as a guard in our deal, you will be amazing, as in like another five years.” Cox made a flawless transition, using his strength, quick feet and defensive experience as a competitive edge in offensive trench warfare.

‘Coach Cox’ spends afternoons at the high school, then reports to Coyote practice at night. “I’m so grateful to the Coyote program,” he says. “It’s opened so many doors, and opportunities, and helped me grow as a man. It’s incredible now to be in a position to keep giving away the blessings and gifts that I’ve been given.”

After coaching all week, his young students get the rare opportunity to critique their teacher each Saturday afternoon, when Cox flips the switch, dons a helmet, and joins the Silver Stretch huddle, where the Coyotes have put up mind-boggling offensive numbers.