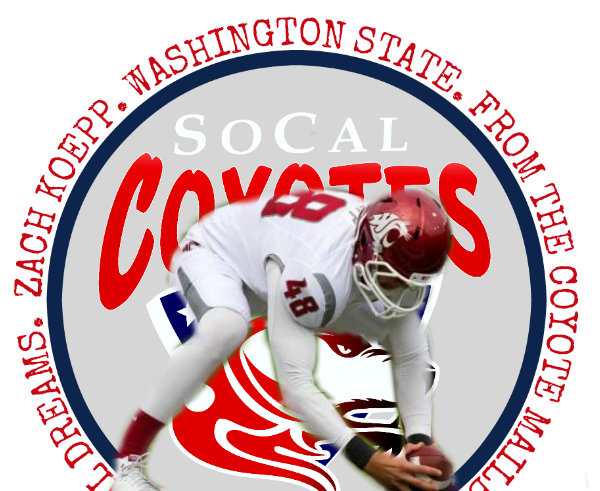 Remove one of those, and you’ve got a challenge, perhaps even a career misfire. But add a little hardship – and some spiritual realignment – to an ordinary man with extraordinary skill, and the result?

A man on fire. Just ask Washington State long-snapper/center Zach Koepp, 6-3, 250, once a blue-chip, five-star recruit, ranked in the Top 20 snappers in the country, described as a “Ferrari” by NCAA long-snapping guru Chris Rubio.

But Koepp’s rocket course to becoming an NFL long-snapper took a wrong turn, right at the intersection of ‘ego’ and ‘attitude.’ As he prepares for training camp with the SoCal Coyotes, he has rediscovered his passion, with an opportunity to prove himself before his next NFL audition.

The following is taken directly from Koepp’s own words, in an email to America’s #1 Developmental Football Program™.

“Not long ago, my path to professional football seemed almost certain. But riding high on recognition, I lost touch with the values required for enduring success. I had become arrogant, instead of grateful, for my gifts.

“I basked in the attention I received. I made mistakes, slacked off, and partied. Then the coaching staff at Washington State changed. This transition brought new challenges and demands. Instead of learning from them, and becoming a better man, I resisted.

“Bottom line – I allowed an over-inflated ego to almost drive me out of the sport I love. But nothing can replace this game. Entrepreneurial ventures, owning a restaurant, buying properties, writing screenplays, coaching youth football, didn’t fill that ache to play football.

“I’m married now, and more mature. I’m seeing it now through the eyes of a man of character and integrity. My mistakes are clear. Only I was responsible for my football career spiraling out. Earning a spot in an upcoming NFL free-agent combine after the Coyote season isn’t the only reason I’m excited.

“The wisdom that only comes with humility, integrity, grit, and perseverance is driving me. Those are the keys to every worthy goal. You can’t take for granted this game, or your love and passion to play it.