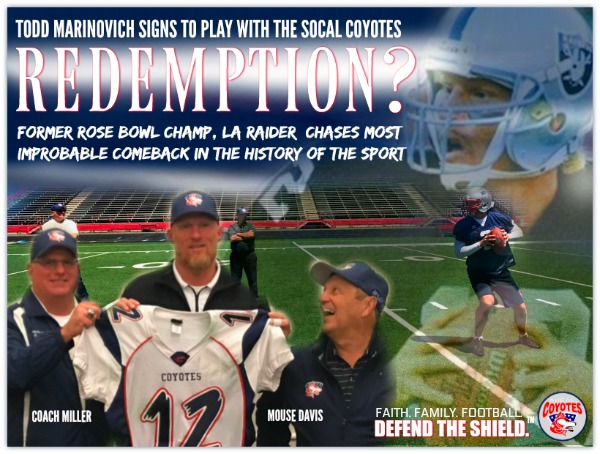 The Coyotes announced that Marinovich, 6-4, 225, whose once-promising career was derailed by drug abuse, will attempt to become the oldest professional quarterback since mythic Raiders legend George Blanda led Oakland on a remarkable AFC Championship run in 1970.

The Coyotes have scheduled a noon press conference Friday at The Vue at Indian Wells Golf Resort to introduce Marinovich to the media, players and fans.

Marinovich, who turned 48 July 4, will compete in camp with second-year incumbent and former NAIA National Player of the Year Jacob Russell. As a rookie in 2016, Russell, 25, threw for a league-best 2,048 yards, 35 touchdowns and only two interceptions in the Coyotes perfect 7-0 season.

The perennial champion Coyotes anchor the Pacific Coast Division of the World Developmental Football League, and open the 2017 season at their Shadow Hills home September 2 against the California Sharks.

The Coyote model and infrastructure – which requires players to adhere to a strict code of conduct, fulfill community service, and engage weekly role modeling and mentoring – might have made all the difference for a young Marinovich decades ago.

The rise and horrific fall of his decorated NCAA, NFL, CFL and AFL career was one of the most documented and publicized in modern football history.

Marinovich first joined the Coyotes as an assistant coach in February 2017. Repeated workouts with the team, however, raised eyebrows, and questions.

“Todd’s been focused on sobriety and God since he’s been here,” said head coach J David Miller. “Beyond that, we have no expectations, just one day at a time. But when he started throwing, his mechanics, arm strength and accuracy are obvious. Overnight he went from being the QB coach to the elephant in the room.

“Nobody really wants to admit what we were seeing,” the coach added. “But perhaps the only thing more outrageous than a 48-year-old quarterback is to deny a talented man the opportunity to play the sport he loves, break the tape, and to leave it on his terms. We anticipate the naysayers, but Todd’s passion, sincerity, humility and desire is extraordinary.”

The Coyotes did seek a second opinion. Before making a decision, they put Marinovich through a Run ‘n’ Shoot crash-course of their high-octane Silver Stretch offense with none other than its creator, coaching legend Darrel ‘Mouse’ Davis.

Miller’s mentor since the mid-80s, Davis is considered the Coyote patriarch, and author of their fire-breathing playbook that has led the team to four titles, two undefeated seasons, and dozens of national scoring records.

Davis was impressed, and Marinovich passed his workout with credibility. Prominent Coachella Valley orthopedic surgeon and Coyotes team physician Sydney Pardino, a former team doctor for the New Orleans Saints, handled the quarterback’s medical intake. After a battery of tests, he declared Marinovich fit for training camp, which opens August 10.

On March 15, 2017, Marinovich was sentenced in Orange County to three years’ probation for a drug relapse that resulted in another arrest last year – one of many that destroyed his career. He has been clean and sober since August 2016, and has been tested weekly since joining the Coyotes.

Since then, schools, churches and organizations have opened their doors to Marinovich, who has shared his cautionary tale to packed houses throughout Southern California.

THE LOS ANGELES RAIDERS selected Marinovich in the first round of the 1991 NFL Draft with the 24th pick overall. He was the second quarterback taken, ahead of Brett Favre, and signed a three-year, $2.25 million deal. Marinovich made his NFL debut on Monday Night Football, against the Dallas Cowboys on August 12, 1991 – before most SoCal Coyotes were born.

AT AGE 43, George Blanda personally won five critical games with a combination of touchdown passes and game-winning field  goals to ‘defend the shield’ of the Oakland Raiders in 1970.