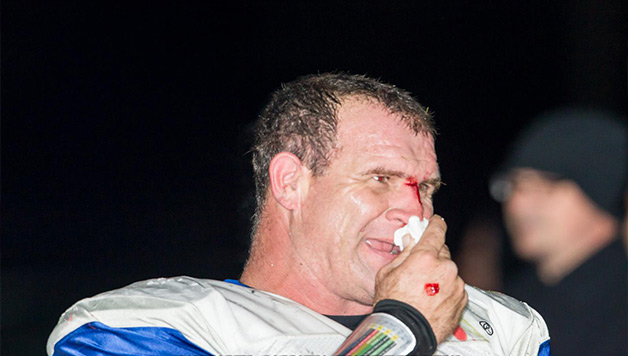 There’s a lot to love about the nationally ranked, undefeated, 3-0 SoCal Coyotes.

In just their second season, these jaw-dropping jackals are shattering standards for offensive and defensive performance. Nate Lewis, their Run ‘n’ Shoot, cover-boy quarterback, is flirting with the Arena Football League and breaks another record every time he throws.  In three games this season, they’ve already scored 160 points and surrendered just 16.

But apparently, there’s also a lot to hate. Why do so many people outside the circle of these Coachella Valley canines despise them with a white-hot, visceral, no-holds-barred hate normally reserved for the New England Patriots or New York Yankees?

“Man, I don’t get the haters,” grins star SoCal running  back “Big Game” James Allison.  “I love the Coyotes.”

Sure, but James plays for them. He must know there are people out there who don’t love his team, right?

“Yeah, sure, definitely,” says Allison. “That’s part of the game, part of sports. Whenever there’s a good team like us, everyone wants to see them go down. Nobody likes it when we win.”

And the classy Coyotes do win.  Usually, by a lot. And on the few occasions when they lose, they blithely ignore the cat-calling on social media and simply move on — no excuses, no finger-pointing, no blame-game.  “We just don’t care,” says tackle Johnathan Zazueta.  “That makes the haters hate even more. The more they hate, the more we pray for them.”

Let’s count the ways to hate

To find out why, the Coyotes checked out messages from a few fans, players and coaches, who had publicly expressed a disregard for these lovable Coyotes. Clearly, there is a select minority of haters who see the team as entitled, arrogant or smug. We took a look at social media to find the top reasons other players, teams or owners seem to hate the Coyotes.

They’re ruthless: The Coyotes Run ‘n’ Shoot offense attracts a LOT of hate. A couple of haters seem to think that the Coyotes run up the score against lesser opponents,  in spite of the fact that Nate Lewis and a plethora of other starters have barely played a full two quarters in each of their games.  In an era where trash-talking and thug behavior is the norm, the team goes widely unnoticed for helping its players find gainful employment, do charitable work in the community, discover faith, and be held accountable for financial and family commitments.

The Coyotes have been known to cut players or staff for trash-talking, unexcused absence or insubordination, apparently a no-no in a free society where haters hate discipline and responsibility. The Coyotes are disgustingly consistent, having never missed a game, home or away. They are pitifully polite, having never threatened game officials or even purposely hurt an opponent. They pay all their bills and quietly cover their players who don’t.  “The Coyotes just act like they are better than everyone else,” wrote one hater.

Their quarterback is a pretty boy. Lewis, the National Player of the Year and currently AAA football’s top-rated quarterback, is the subject of much hate. But why? He is married, owns his own business, is stable, never misses a practice or team function, tirelessly assists his teammates, and in his free time works with less-fortunate kids in the community.  The San Jose Sabercats of the Arena Football League have him on their radar for 2013.

“Lewis ain’t (expletive),” wrote one hater.  “My grammomma could roll up mad yards if she wuz playin in (that) joke (offense).” That actually prompted a reply from Coyote head coach J. David Miller. “We would like to bring your grandmother in for a workout,” the coach wrote. “Tell her we don’t punt, she has to be fearless in the pocket, and I need her to complete 73 percent of her passes.”

Their coach thinks he is the smartest guy in the stadium: Friends and peers throughout the national media, NFL, Arena League and his award-winning 30-year journalism career say Miller is a talented, personable guy. However, a smattering of minor-league football owners, coaches and commissioners who have crossed swords with Miller call him an assortment of names, with “jerk” being the kindest. “He’s a (expletive),” wrote one in a public forum.

Others disagree, including Dick Suess of the American Football Hall of Fame and editor of the Western Football News. Suess picked Miller as the 2012 National Coach of the Year; appointed him as head coach of the West All-Stars (they won, 26-6); and nominated Miller for the 2013 class of the Minor League Football Hall of Fame, who unanimously accepted him.  “Coach Miller has made major contributions to the sport of football as a player, coach, administrator, journalist and author,” Mr. Suess said. “This is evident in the Coyotes and their first-class organization.”

The Coyotes hurry up and dink. This is the hardest one to understand, but critics complain about the Coyotes reliance on short “bubble” passes, “arrow” routes, and their hurry-up attack. “The Coyotes do some suspect stuff on offense,” said one hater. “They can’t just line up and block you and run it right at you. They try to trick you with all that dink and dunk crap.” In 2012, the Coyotes ‘dinked’ their way to 5,212 total yards, tops in the nation. Lewis averages a whopping 20.2 yards per completion, hardly the sign of a dump-off offense.

Their defense hits late and cheap shots.  In one game this season, the opponent stopped play at midfield, complaining that the Coyotes were spearing and grabbing body parts under the pile. Laughing referees ignored their pleas, threw no flags and insisted action resume. The Coyotes hard-hitting ‘Dark Side’ defense, while aggressive, prides itself on furious, but clean, play. “We frustrate teams by shutting them down,” says defensive end Jordan “Ice Man” Cornell. Agrees All-American Devion Brown, “The more the other guys talk, the louder our pads get. Honestly, that makes teams hate us even more.”

The Coyote announcer and fans are insufferable. Every team who has ever visited the Coyotes has complained about announcer Robert Martinez for having a little fun with the opposition. For instance, when a vocal cornerback mocked the Coyotes in the Pac West championship, then was horribly beaten for a touchdown by SoCal All-American Rashad Roberts, Martinez said, “Wow, you really got smoked on that one, Number 2.”

While the fans roared, it didn’t sit well. “Their announcer is a punk,” says a hater.  The Coyote fans aren’t popular, either. At the national championship, haters harassed Coyote fans.  Ironically, unbeknownst to Coyote opponents, Martinez is a pastor and church youth leader. Most of their fans are wives, parents and children, supporting their husbands and fathers. In fact, most Coyote games are a family affair, but hey, who’s counting?

Everybody hates a winner. “Any time anybody hates you,” says Coach Miller,  “we think that’s a good thing. It means you’re doing something right. Win or lose, we ‘defend the shield.’ The shield is faith, family and football. We love all the haters. You can’t hate love forever, and we love ’em all. Love conquers all.”

Defensive end Don Howard, who used to play for another AAA team, has now seen the Coyotes from both sides.

“I had my eye on this team for a long time,” says Howard, 6-3, 295 pounds, and in his seventh AAA season. “I read about these guys. At this stage of my career, I hand-picked the team I wanted to play for. I moved here to be a Coyote. I came here for Coach Miller’s work ethic — the discipline, the class, the faith,  the organization. This team knows how to win. You look up to the Coyotes.  Whenever you win a lot, you get a lot of envy, a lot of jealousy.

“When you’re doing well, people are always going to have something negative to say. You can’t get caught up in that. The Coyote way with us is we buy into each other. We believe in the Lord, we buy into this locker room, this team and us — not what everybody else is saying.”

Besides, says Howard, if other people actually take the time to hate you, “that’s really just a sign of respect.”