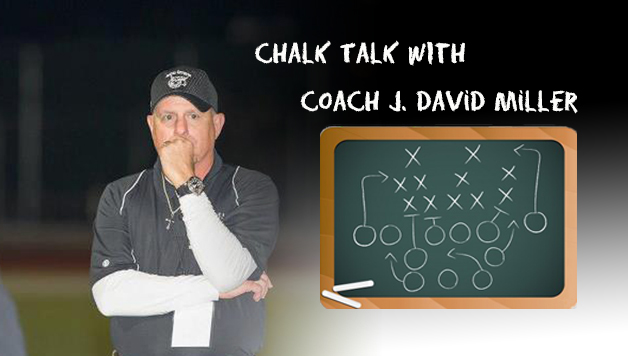 So much has happened to the SoCal Coyotes — and in my own life and family —  in a single year, that I really don’t know where to begin.

In 2012, we were blessed to win the Pac West. We were the runner-up in the national championship. We put an unprecedented 11 All-Americans in the All-Star game, running two very controversial, but very fundamental schemes on offense and defense. Our quarterback rose to national prominence and continues to baffle his critics who once said he was good, but would never be great.

Our team shares a love that defines us and separates us from ordinary teams. When we use the word ‘ohana,’ we mean it. Ohana means family, and family means nobody gets left behind, or forgotten. We are setting standards to change the traditions and culture of the sport at this level in everything we do.

Our ‘shield’ is our foundation, and it stands for faith (God), family and football. The snarling Coyote represents our organization, and we viciously defend — and protect — the shield. We aren’t perfect. We are evolving. We’re merely trying to get better, every single day. We are building on a foundation that believes tribulation requires perseverance; perseverance builds character; character blossoms into hope; and hope does not disappoint.

When you hear about Coyoteball, we want you to think about hope.  This team plays for something far greater than pride or personal recognition. As a unit, we are all playing for our collective lives, for second chances, for redemption. You can’t measure us by wins or losses. Every storm, every situation, every trial, every single defeat we’ve ever had in our collective lives is now a source of strength, a source of joy, another reason to come alive.

Coyoteball sweeps us to our feet because in the violence of the game of football, we have discovered peace, rest, and for some, even life.

I didn’t come to the desert to return to coaching. Truthfully, I came here with my wife Laurie Beth to finish another book, and we did. But our path took a left turn with the Coyotes, and we heeded the call.  We were able to prove again we can win in a hostile environment in a very different way than you’ll find in most playbooks. Our goal from day one was to throw first, and have fun second. We do this every day, in the office, at practice and in games. I’m grateful to be given the opportunity to lead this team. It is truly the best job anyone could dream of having, because the rewards come daily in the lives of the young men that now make up our great program.

The Coyotes will always live on the edge. I knew we would be second guessed, because winners always are. Whether it is kicking on-sides to start the game, not kicking obvious field goals, throwing the ball on fourth-and-15, or faking punts from our own 15-yard line, this was the way I decided I wanted the game played.  Just like Coyotes, we are totally unpredictable.

We also knew that putting God first in all we do would change lives.  A passion has risen up inside me that I cannot explain, starting with major adjustments in my own life. Every day we’re all pulling together to be better husbands, better fathers, better friends, better citizens, and the results are powerful. We now get emails from players and coaches across the country who want to join our tradition, change the culture, be a Coyote, and defend the shield.

That gives me goosebumps.

I’ve been taught that you can be a champion by being a totally positive person. We want to prove every day that we can win with positive reinforcement. Many of the other powerful coaches with whom I’ve worked believe the same thing — that a pat on the back, a hug around the neck, a moment of private prayer — can accomplish more than the traditional ‘my-way-or-the-highway’ approach.

We are determined to build up, not tear down, the people around us.

Sure, we realize that every personal failure and shortcoming puts a bulls-eye on our back and makes us an open target for criticism. But that’s no excuse to compromise getting better. Winners don’t have time to make excuses; they’re too busy trying to change their own lives and get better. Winning is paramount, because losing is a by-product of apathy. We care who wins — that’s why they keep score. We talk about the day that is fast approaching when Coyoteball will be at the very pinnacle of AAA football; not comparable, but better, than any team in the nation. We have so many things that need to be changed, but we are all a part of a growing miracle in the desert that will never be forgotten.

As we further define Coyoteball, it must include total attention to detail and an appreciation for every facet of football and the refinement of those things that are needed to provide an environment that allows us to perform and succeed at their maximum level.  Discipline is based on pride, on meticulous attention to detail, and on mutual respect and confidence. Discipline must be a habit so ingrained that it is stronger than the excitement of the game or any fear your mind can conjure.

I’ve been blessed to work with some of the greatest minds to ever grace our sport, and we’ve taken a little bit from every one of them, packaged it up, and made it uniquely our own.  History is our collective memory. It is our accumulated experiences. It is invoked constantly and unconsciously by every person, every day, to help them make decisions based, to some extent, on what has gone on before in their lives.

For instance, NFL Hall-of-Famer Hank Stram, who coached in the first two Super Bowls and won Super Bowl IV, was so meticulous that he researched his players back to their childhoods, believing that he could uncover a single fact that could make a motivational difference in a player’s attitude, and ultimately, a game.  He taught me that no detail is too small, especially when it comes to listening to your players and discovering their real attitudes. Of course, he taught me a lot about moving the quarterback in the pocket and ‘matriculating’ the ball downfield, but the biggest thing I learned is that you can’t win unless you have people with great attitudes, and sometimes it’s your job to find it in them.

Jerry Glanville, the ‘Man in Black,’ is among our greatest defensive influence. Glanville believes Elvis is still alive, left him tickets at will call, and we spent a few years together writing Elvis Don’t Like Football.  But don’t be fooled by his humor: The man is a defensive mastermind. We had more than a few late nights where Jerry would write defensive schemes on pizza boxes or anything else he could get his hands on. When I asked him once how he had fared against the great Joe Namath, Glanville didn’t hesitate: He dialed up the safety blitz 46 times. “We sent corners, safeties, linebackers, even a few ball boys,” he chuckles today. Namath took a beating, and on the flight home, had to be packed in ice.

Nobody, however, influenced me greater than Mouse Davis, the godfather of our full-throttle Run ‘n’ Shoot offense, or his protege, June Jones.  They have mentored me throughout the ranks of professional football since 1987. Half the books I’ve written are chock full of their influence or direction, and Mouse’s offense, his teams, his players and philosophy are staples of my career successes on and off the field.

Thanks to Mouse, I was able to play in the Arena Football League in Pittsburgh under defensive guru Joe Haering, who is still with June today at Southern Methodist University.  Thanks to Mouse, I’ve been around the Arena league since the day it was born, and I’ve developed some life-long relationships that I cherish to this day.

The Run ‘n’ Shoot is far more than a strategy: It’s an aura, and it warms you like sunshine. There is a supreme sense of confidence you get from being around Mouse, June, the offense, its success, and all the amazing stories and personalities that are all part of the Run ‘n’ Shoot family. Mouse is now part of football history, but without a trace of vindictiveness or disdain. It’s not often you can take an idea, cram it up the posterior of the entire football world, change the way the entire game plays offense, yet remain so humble that and subtle that even your enemies embrace you.

“Find what you do well,” Mouse says with his trademark grin. “Then do it consistently.”

Therein lies the magic of Coyoteball.

In closing, we don’t expect everybody to like us, understand us, believe us, or embrace us. But when we talk about Coyoteball, we extend an open invitation to you, especially if you’re searching for an identity, a fresh slate or a place to start. The Coyotes have a highlight film that describes us in a ‘big ol’ bus,’ and if you’re looking for a ride, come ride with us.

One fact constantly holds true, and it’s something we tell our players every day: The memories we keep are not found in wins and losses, but in the eyes in our locker room and in the eyes of those people we meet along the way. We will all forget the touchdowns and the final scores, but the eyes and the faces and the passion of every man and woman who stood with us will live on forever.

There’s plenty of safety, plenty of room and plenty of love behind the shield.

When the Coyotes pour out on the field, our opponent matters less than our purpose.

We defend the shield.