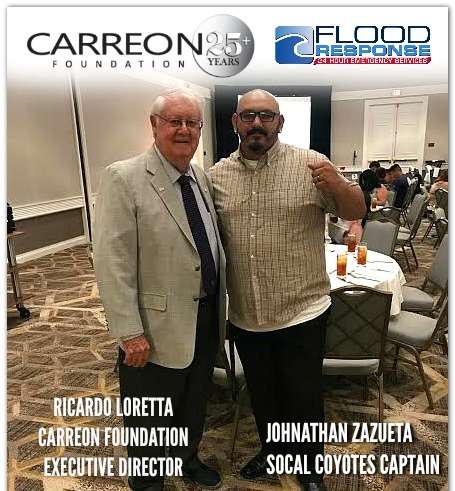 Coyotes team captain Johnathan Zazueta, who is heavily involved in an array of Coachella Valley charities that create opportunity and encourage those of Mexican-American descent, was a personal guest of Ricardo Loretta, executive director of the Carreon Foundation.

To date, the foundation has awarded more than $1 million in scholarships to more than 400 students from local high schools. Recipients have attended schools including College of the Desert, the University of Southern California, UCLA, MIT and Harvard University.

The Reynaldo J. Carreon M.D. Foundation was founded in 1990 by the late valley philanthropist and pioneer, Dr. Carreon, to provide underprivileged students of Mexican descent a chance to pursue a higher education.

To date, the foundation has awarded more than $1 million in scholarships to more than 400 students from local high schools. Recipients have attended schools including College of the Desert, the University of Southern California, UCLA, MIT and Harvard University.

Dr. Carreon was a co-founder of what is now John F. Kennedy Memorial Hospital in Indio and helped found the Coachella Valley Mexican American Chamber of Commerce in 1980. Dr. Carreon Boulevard, the Dr. Reynaldo J. Carreon Junior Academy and Dr. Carreon Park, all in Indio, are named in his honor.

Scholarships are awarded to students who have at least a 3.0 GPA, are involved in the community, are of Mexican ancestry, and demonstrate leadership skills and financial need.

Scholarships range from $1,250 to $5,000. Students must show a commitment to bettering their communities like the organization’s founder, Dr. Carreon.