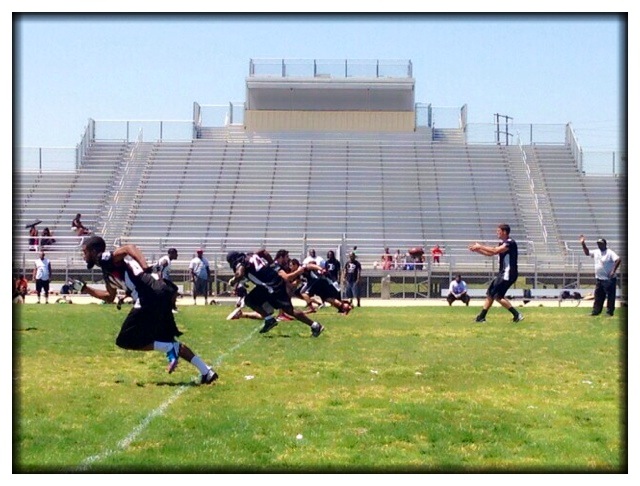 COYOTES, RAIDERS DEADLOCK IN 7 ON 7 OTA

(SAN BERNARDINO) — The SoCal Coyotes stepped out of a month-long hibernation today, and sniffed the new UFAL landscape for the first time: A 7 on 7 passing OTA with the Cali Raiders.

In an organized team activity that allowed both squads an equal 70 snaps, the session ended in 7 scores apiece. But for Coyote fans, there was no mistaking the vertical stretch of the Coyotes’ potent Run ‘n’ Shoot offense, or the magic between quarterback Nate Lewis and receiver Rashad Roberts.

The spectacular Roberts caught four touchdowns. Newcomer Nick Lee showed glimpses of brilliance, and scored once. The third touchdown was an amazing grab by the surprising Sebastian Hall, who made a case to see more time on offense. The Coyotes scored on every possession but one.

“It was a super practice, and great work on both sides of the ball,” said head coach J. David Miller. “I am proud of our football team for staying in shape, staying in the weight room, and it showed in our conditioning. Everybody played well, especially the defense. The break did us good. Frankly, I think all of us were a little surprised how fast we clicked., especially with the new personnel.”

“We thank the California Raiders and their organization for the early workout,” Miller added. “Today, they gave us a little taste of what we’ve got to do to compete at this level.”