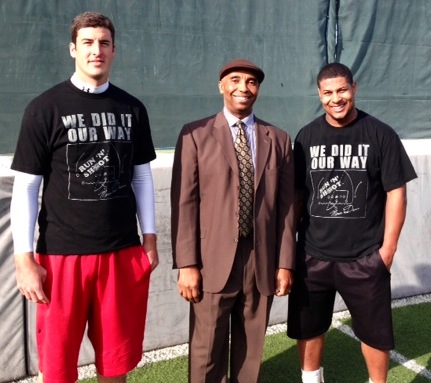 (SAN JOSE) — SoCal Coyote quarterback and National Player of the Year Nate Lewis will return to the Arena Football League’s San Jose Sabercats February 3-7 for mini-camp, the Coyotes confirmed today.  It will be Lewis’s second workout in the saber-gold and coral-green colors of the Sabercats, where he will join veteran quarterback and AFL Hall-of-Famer Aaron Garcia, and rookie Mitch Mustain.

Pictured above during a recent workout (from left) is Lewis, Sabercat Head Coach Darren Arbet, and the Coyotes David “The Diesel” Cathcart. An Arena Football League Hall of Fame inductee, three-time ArenaBowl champion and two-time AFL Coach of the Year, Coach Arbet brings a passion and work ethic that is unmatched in the league. Entering 2013, his 17th season with the franchise, Arbet begins his 13th as head coach and third as part owner of the franchise.