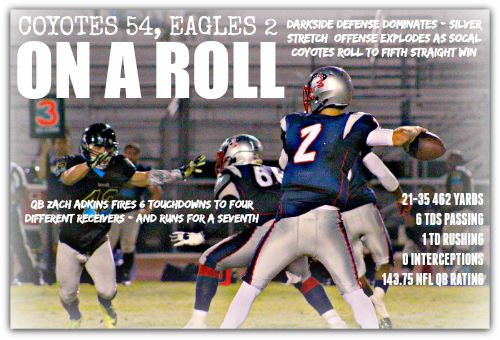 (SHADOW HILLS) – In a virtuoso Silver Stretch offense performance, league-leading quarterback Zach Adkins threw for 462 yards,scattered six touchdowns to four different receivers, and ran for a seventh to lead the three-time champion SoCal Coyotes (5-1) to their fifth consecutive win with a stifling 54-2 plucking of the visiting Chino Eagles.

The Darkside Defense – which should have recorded a shutout – was led by a dominating performance from league-leading ‘Twin Terror’ defensive ends Jake Sheffield and David Williams – who had four sacks and 3.5 sacks respectively. Sheffield (11) and Williams (10) are chasing each other for the league lead in sacks, and the teamwork between the pair was evident Saturday night, especially when Williams pounced on a fumble forced by Sheffield.

The Eagles only scored when an errant snap went over Adkins head in the first half, and the quarterback alertly kicked the ball out of the end zone to prevent a Chino touchdown.

The victory set the stage for a much-awaited rematch in two weeks at home against the San Diego Stallions, who stunned the Coyotes 17-16 in Week One after incumbent quarterback Michael Karls suffered a season-ending ankle injury. The rematch will be carried on national television by the RAM Sports Network.

James ‘The Human Highlight Film’ Calhoun – having his best year in his third Coyote season – had seven catches for 137 yards for two touchdowns, running his league-leading season totals to 917 yards and 14 touchdowns.

Rashad ‘The Franchise’ Roberts hung his first 100-yard day on the board this fall with a seven-catch, 103-yard performance, with one touchdown. Stevie Will Jr. had six catches for 79 yards and two touchdowns, while Demario ‘The President’ Brown added three catches for 69 and a score.

Running back Warren Matthews rushed five times for 64 yards and a score. Adkins also ran twice for 21 yards, including a five-yard rushing touchdown.

ADKINS CHASING HISTORY – The heralded record-setting rookie quarterback from Northwestern (La.) State – who earned a trip to the NFL Super Regionals this spring and was worked out by five Canadian Football League teams – now has 33 touchdowns since replacing Karls.

With five regular-season games to play, he continues his assault on the Coyotes’ single-season record books. In Coyote single-season history, his 32 touchdowns passing barely trail Michael Karls (36) and Nate Lewis (35). With 2,094 yards on the season, Adkins will need to average 274 yards a game the rest of the way to shatter Nate Lewis’s club mark of 3,465, set in 2012. As a Coyote, Adkins has never thrown for less than 300 yards.