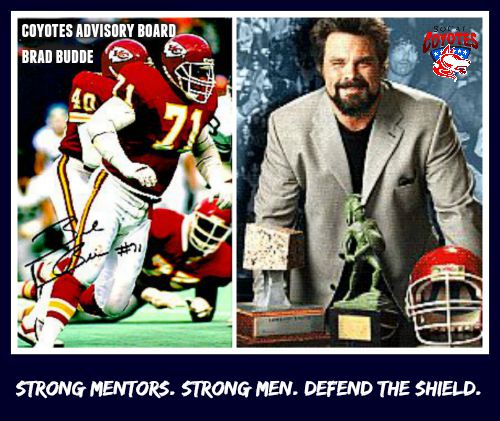 (PALM SPRINGS) – Success must be learned – before it’s earned.

That was the challenge to the three-time champion SoCal Coyotes this morning – from newly appointed advisory board member Brad Budde, former Kansas City Chiefs standout, College Football Hall of Famer – and one of the greatest offensive lineman in University of Southern California history.

In addition to advisory board duties, Budde eagerly stepped into his new role as a ‘life coach’ with the Coyotes non-profit sports leadership organization, where selfless work ethic, accountability, and improving others – all staples of his decorated career – will be among standards SoCal Coyotes players can anticipate from their newest mentor.

Coyotes head coach J David Miller said his players “can expect immediate life counsel, and accountability” from Budde, who by Tuesday afternoon was already reaching out to – of course – the Coyotes offensive linemen. “The water just got deeper here,” Coach Miller added.

Drawing from his unique life experience as a professional athlete and entrepreneur, Budde serves both private corporations and government agencies to increase team efficiency and performance – with unprecedented results.

“Brad’s passion for excellence, which allowed him to dominate as a football player and businessman, will empower the SoCal Coyotes staff and players in our quest to produce the nation’s most dynamic leaders,” Coach Miller said.

Budde will be in the Coyotes locker room October 3 for the team’s much-anticipated rematch with the San Diego Stallions, which will be nationally televised on the RAM Sports Network.