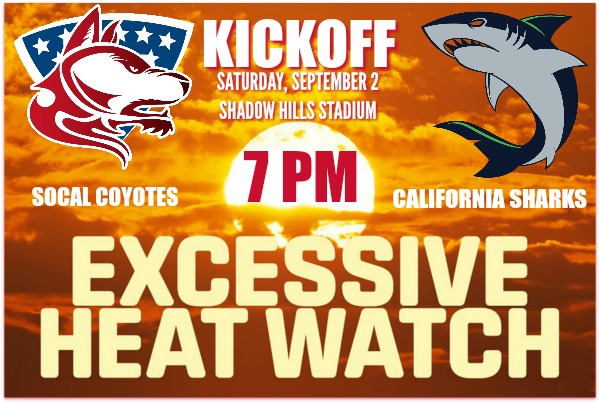 (INDIO) – Of course, a Higher Power continues to play the biggest role in the ‘Marinovich Miracle’ this Saturday.

With Californians buckling during daytime exposure to ‘Excessive Heat Warnings,’ the Coyotes and Sharks, who play in the Pacific Coast Division of the World Developmental Football League, happily agreed to the 7 p.m. kickoff.

In addition, pop-up tents from corporate partner Hot Purple Energy will provide cooling stations on the sidelines for athletes of both teams.

“Nothing is more important than the health and safety of our players and fans,” Mr. DiGrandi said.

Marinovich, the 1990 Rose Bowl champion 1991 first-round pick of the Los Angeles Raiders, will become the oldest pro starting quarterback in pro football history when he returns to action in his Coyote comeback.

The much-anticipated contest will be carried live on high-powered FM 97.3 KCLB ROCKS, and also stream live around the globe at  www.937kclb.com. Anyone with a mobile device can catch the game, news, stats, rosters and more by simply downloading the free Coyote ‘YAPP.’ Download the Coyote ‘YAPP’ by searching ‘SoCal Coyotes’ on iTunes or Android Market.