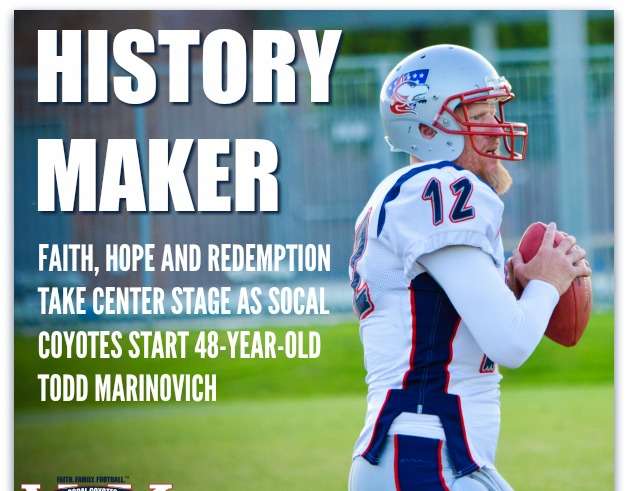 The Coyotes host the California Sharks at 7 p.m. at their Shadow Hills Stadium home.

After a career riddled by addiction, Marinovich has become a most unlikely hero to those who still suffer. His dogged tenacity to come back to the sport has sent a message to the masses that faith, hope and redemption are available for all.

Saturday a clean and sober Marinovich will be vividly aware of the young defensive ends crashing toward him. He must trust his offensive line, and running backs LeRon Wilson or Dylan Peebles assigned to blitz pick-up, to spare him pain in the pocket.

Odd days for Marinovich. Odder still for his teammates, a few of whom just discovered their quarterback is the same age as their dad.

“We’re all in unchartered water with Todd,” smiled head coach J David Miller. “Him, us, coaches, refs, opponents, fans, everybody.  We’re proud of all the hard work he’s put in, the message he’s sending to those who still suffer, and the hope he inspires.

“Saturday, there’s a million ‘what-ifs.’ Most of them are good.”

Alpha Media moved the live broadcast of the much-anticipated contest to its more powerful and #1-rated FM 97.3 KCLB ROCKS, which will also stream live around the globe at  www.937kclb.com.

Anyone with a mobile device can catch the game, news, stats, rosters and more by simply downloading the free Coyote ‘YAPP.’ To download the Coyote ‘YAPP,’ search ‘SoCal Coyotes’ on iTunes or Android Market.