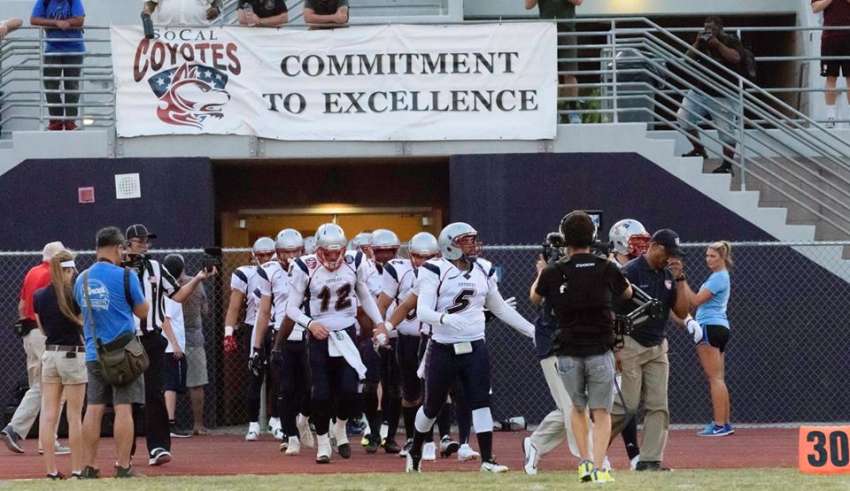 (INDIO) – After a 17-year layoff, a sober, 48-year-old Todd Marinovich stepped back into pro football and remarkably completed 68-percent of his passes for 262 yards and fired seven touchdowns to lead the four-time champion SoCal Coyotes to a 73-0 victory in their 2017 home opener against the California Sharks.

For America’s #1 Developmental Football Program™ the lopsided score and shutout were nothing unusual. However, ‘The Marinovich Miracle’ – fueled by his two-decades of public struggles with the addictions that have nearly killed him – captured the attention of fans around the world.

Including Oakland Raiders owner Mark Davis, who attended the game to witness the ‘new and improved’ Todd Marinovich with his own eyes.

“The over-riding message tonight was that God’s in control, stand on the truth, don’t be afraid,” said head coach J David Miller. “The entire Coyote organization, specifically our players, were honored to play a role in Todd’s miracle, and his comeback.

“It was definitely Todd’s night.”

It was the Coyotes 21st consecutive victory dating back to 2015. Marinovich piloted the Coyotes ‘Silver Stretch’ Run ‘n’ Shoot offense to one of its most memorable openers in the team’s 10-season franchise history. Personally, the one-time ‘Robo QB’ navigated deep into uncharted waters previously only reserved for comebacks like boxing legend George Foreman.

Marinovich threw his first TD pass in nearly two decades – a 17-yard strike – to BYU star Devon Blackmon. Marinovich then answered with a 49-yard bomb to CFL prospect Jarrod Harrington. His third touchdown of the first half was only 10 yards, but a perfect rainbow, to Harrington.

For the second time in as many seasons, running back Dylan Peebles scored the game’s first touchdown, rumbling 39 yards through the heart of the California defense. The Cortland State product led all rushers with 80 yards on eight carries.

The Darkside Defense drowned the young Sharks. AFL veteran and Coyote legend Shaine Boyle had an 88-yard interception return for a touchdown, and added a sack and two tackles. Linebackers Robert Caldwell and Gary Young combined for 10 tackles and six sacks.

Defensive end Rafael Lamas added 3.5 sacks and a punt block, while on the other side, Jake Sheffield added a sack, a punt block and a safety. Linebacker Jerimiah Spicer had a fumble recovery and two sacks, while linebacker Will Hoglund also scored with a safety.

From ‘Marinovich Miracle’ to youngest player, the Coyotes demonstrated developmental football at its finest. The program’s ‘conveyor belt to manhood’ was on full display – every prospect searching for his next rung on life’s ladder, both on and off the field.

“Every person here has an asterisk,” Coach Miller said. “The Coyote program finds your asterisk and removes it. In Todd’s case, his asterisks have been considerable. But for all of us, God is not a gimmick. Faith is free. Hope is here – and redemption, our own free will.

“Todd’s story sends a message – that our lives boil down to the choices we make.”