Home Uncategorized COMBINE 2016: DO YOU HAVE WHAT IT TAKES TO PLAY FOR AMERICA’S #1 DEVELOPMENTAL PRO FOOTBALL PROGRAM? 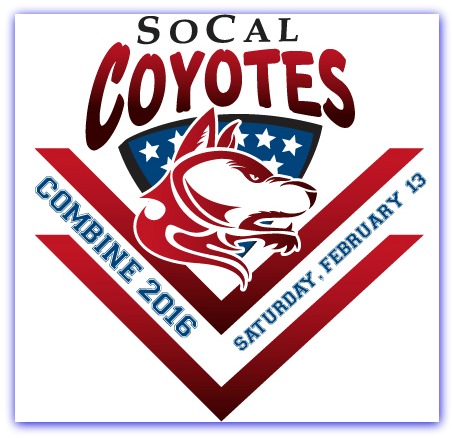 (SHADOW HILLS) – Just weeks removed from winning their fourth championship, the SoCal Coyotes announced today they will train and practice for both 2016 spring and fall seasons at their Shadow Hills High School home, beginning with the team’s Combine 2016 and annual  open tryout, Saturday, February 13, which begins at 8 a.m.

There is no charge for Coyote hopefuls vying for a roster spot on America’s #1 Developmental Pro Football Program.  Attendees at Combine 2016 also will enjoy speed /strength /conditioning /training from Coyote linebacker – and Official Strength founder and fitness icon – Cade Cowdin. Athletes of all ages and sports worldwide train under Cowdin at his St. George facility. (To see Cowdin’s remarkable training portfolio, visit his Instagram at cadecowdin.)

Combine 2016 serves as both an open tryout for prospective Coyotes, and intake for returning veterans, with physicals, orientation, 2016 contracts, equipment re-issue, and more.

PLAYERS WHO WISH TO BE INVITED must email Brandon O’Neill, VP Program Development, at [email protected], or call 760.272.8799.

EACH PARTICIPANT IS REQUIRED to wear black or navy blue shorts and a plain white t-shirt. Players who earn a coveted roster spot on the SoCal Coyotes spring roster will receive a full scholarship will enjoy the benefits of a full Coyote scholarship. The Coyotes will dress 35 players a week for a 10-game spring season that begins in late February. An announcement of the schedule is imminent, team officials said.

THE MOST DOMINANT football program in Coachella Valley history, the Coyotes are 63-11 under Hall of Fame head coach J David Miller, a three-time Coach of the Year selection in three different leagues. In seven seasons, the Coyotes have played in six championships, winning four. They travel to northern California February 20 in the San Francisco Golden Gate Bowl.

DID YOU KNOW? The Coyotes have led six different leagues in total offense, won four titles with three different QBs, produced three different MVPs, and one National Player of the Year.  Discover their success stories – and much more – by exploring the vast Coyote archives at www.thesocalcoyotes.com. Click on ‘What We Do’ – and find out why The Football Educator, operated by former Denver Broncos GM and two-time Super Bowl-winner Ted Sundquist named the Coyotes ‘America’s #1 Developmental Pro Football Program.’

ON THE FIELD, 70 PLAYERS EACH YEAR earn the distinction of ‘Defending the Shield’ in the uniform of the SoCal Coyotes. Many will graduate each year into professional football or local careers. Off the field, in Coachella Valley public schools alone, 30,000 students annually participate in Coyote Leadership Training and receive published Coyote Leadership Curriculum.