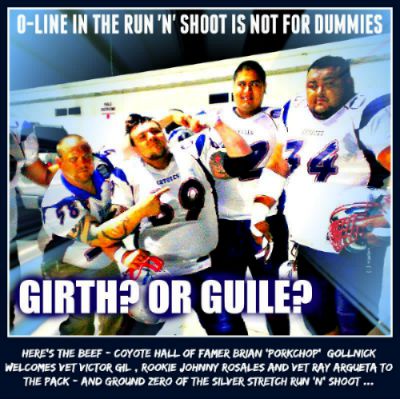 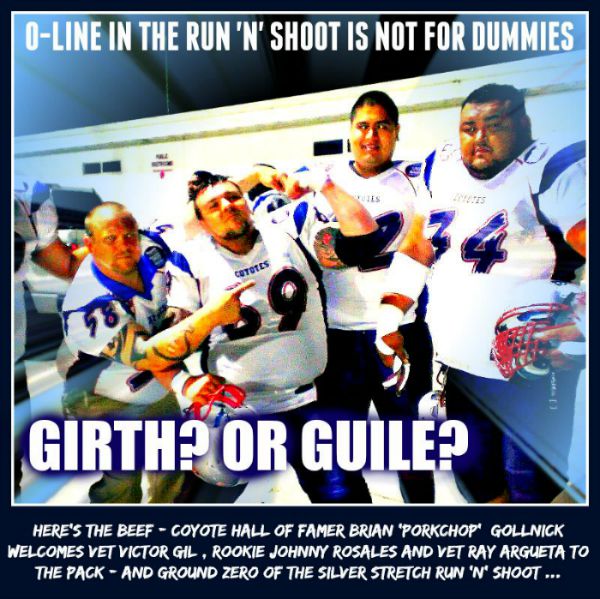 Ground zero of the Run ‘n’ Shoot is the o-line, where constant communication prevents waves of blitzers from finding a toll-free speed pass to rookie signal-caller Zach Adkins, who tied a club record last Saturday with nine touchdowns.

“We have to be smart – processing information and communication is the key to an elite offensive line,” says Argueta. The Canadian Football League camp prospect was the first in his family to receive a degree from a four-year institution – a bachelor’s in sociology, with a minor in criminal justice. He’s no dummy, and, for the record, neither are any of his beefy friends on the line.

The Wonderlic test administered by NFL teams is proof. Over a five-year period, offensive tackles and centers score the highest, and offensive guards are fourth, behind quarterbacks. These behemoths are thinking men, forever calculating defensive formations and alignments while obsessing about which foot to move first at the snap, or how to position the hips for optimum leverage.

Argueta’s heart, however, may be his biggest muscle. A miracle unto himself, in fact, after doctors operated on both his hips in junior high, and told him he’d never play sports again. But his own disabled mother fueled his motivation, and he never disappointed coaches, her, or anyone else. After a distinguished football career carried him through college – and, ahem, graduation, Argueta served as an advocate for Disability Rights California, a non-profit organization federally mandated that provides legal services to those with developmental disabilities. He’s also been a single father to nine-year-old son Xavier since his birth.

“God has given me great strength, and patience, to overcome life’s many trials,” he says softly. Attacking his quarterback, by the way, only affords Argueta the opportunity to overcome life’s trials on YOU, and few defensive linemen who find themselves in the grip of this meat grinder ever get the chance to discover his ‘gentle’ side.

Gil, meanwhile, wants you to believe he’s just a fun-loving character, a monster movie fanatic, and a comic book freak. But dig a little deeper, and you’ll find a consistent, blue-collar, “lunch-bucket guy” who minds his business, pays his bills, takes care of an ailing mom, puts everyone ahead of himself, and is more dependable and durable than a John Deere tractor.

“We truly are the brains of the whole outfit,” jokes Gil. “We get hit 70 times a game. It takes a unique mental makeup to endure what we do – and never stop thinking about food.”

So the next time you see the Coyotes huddle offensively, take a moment to savor the hard-working linemen – socks drooping, jerseys stretched, dwarfing over the Coyotes ‘Mouseketeer’ wide receiving corps.

Like performing elephants, they move with power and grace, a mass of entangled flesh that creates a formidable wall while Adkins and his aerial acrobats light up the defense with thrilling throws and catches. After each series, they politely disappear to the anonymity of the bench (albeit every inch of it), their sweat forming hot steam that curls up around them like smoke from a barbecue pit.

But don’t be fooled.