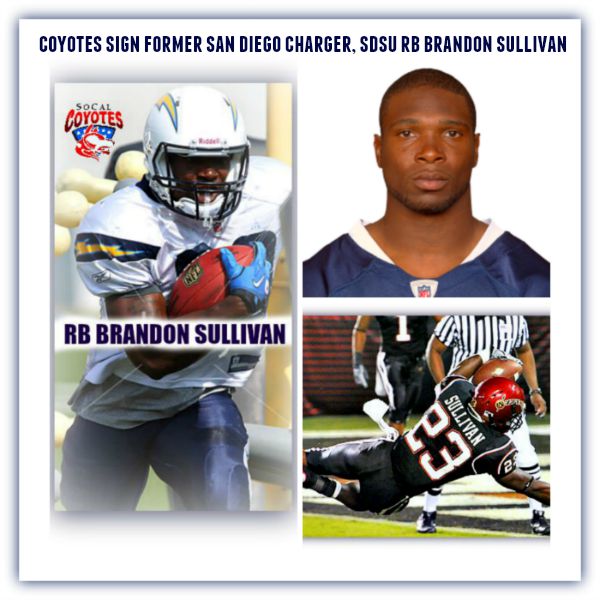 (PALM SPRINGS) – Former San Diego Chargers running back Brandon Sullivan, 5-11, 220, who has averaged 3.7 yards a carry in his career and led San Diego State in rushing as a junior, has reached agreement with the SoCal Coyotes and will play Saturday night against the San Diego Nighthawks, America’s #1 Developmental Pro Football Program announced.

“It’s exciting to be part of an opportunity like this,” said Sullivan, who was a 1,000-yard rusher at San Diego State. “I’m proud to be part of the class and excellence of the Coyote organization. Coach Miller reached out to me as an experienced role player who could bring professional leadership to a very young, but talented, football team. I told Coach that I’m ready to step into my role and do whatever it takes to help the Coyotes bring home a fourth championship.”

Sullivan adds serious veteran depth to an explosive Run ‘n’ Shoot Coyote offense. He will back up 2014 Indoor Football League rookie of the year Warren Matthews Jr. in the ‘S’ back position, who is averaging 10 yards a carry on 18 attempts this fall.

Coyotes head coach J David Miller said the acquisition of Sullivan will impact short-yardage, red-zone and two-point-conversion play-calling. “Brandon is a one-step, downhill, slasher,” Coach Miller said. “We have an offensive line that weighs 2,000 pounds and believes in snot bubbles and nosebleeds. Brandon is a gap artist who runs between trees and understands the value and beauty of the incredible three-yard run.”

The Coyotes play NFL rules, with extra points now kicked from the 15-yard line, and two-point conversions at the 2-yard line. In Saturday’s 76-6 victory, the Coyotes went for two all but once.

Off the field, Sullivan owns an Orange County -based training company – Provizion Athletics – that teaches young amateur and professional athletes performance development and movement skills, while being heavily involved as a coach and mentor in high school football and leadership programs. EA Sports, the world’s largest sports video gaming corporation, frequently utilizes Sullivan’s talents for motion capture on Madden NFL, at their campus in Vancouver, Canada.

“We’re not just getting a veteran football player and a locker-room leader,” Coach Miller said. “Brandon is a role model who will nurture our young players and understands the meaning of ‘Defend the Shield.’ He is serious about his commitment to God, service to others, and service to community.”