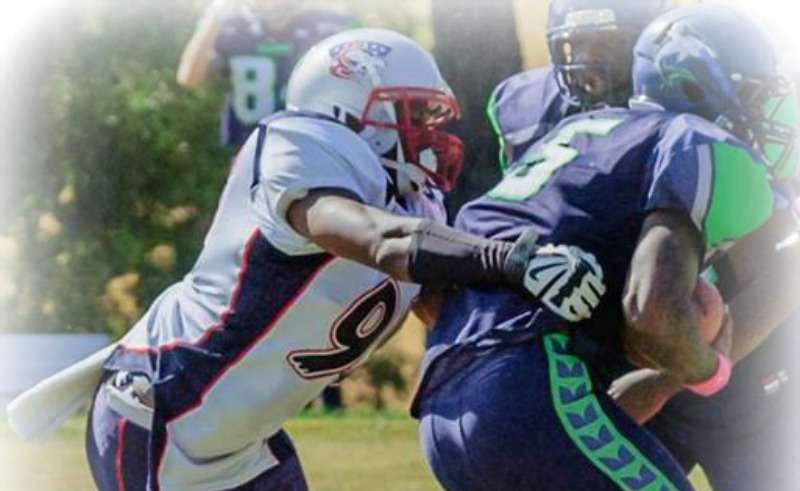 (INDIO) – In August, the five-time champion SoCal Coyotes will report for their 11th training camp at Shadow Hills. Rookies report Thursday, August 16, while veterans report Friday, August 17, and orientation for both is that Thursday night. Two-a-days begin Saturday, August 18.

To hold you until then – here’s five bold predictions to chew on.

1. DE Jeremiah Mitchell will emerge as an unstoppable force off the edge.

As a rookie in 2017, the 6-4, 270-pound Washington State star signed late and only saw action in two games, but proved lethal opposite of Jake Sheffield, the Coyotes all-time sack leader. With a full camp under his belt, and Sheffield drawing triple teams, expect Mitchell to be a one-man wrecking ball in opposing backfields. Size, speed, wingspan – Mitchell has it all, including an angry disposition toward any quarterback who dares wait too long in the pocket.

2. Rookie wideout Taylor Pope will be the #2 QB.

Pope was a solid quarterback for La Quinta High School, throwing for 1,414 yards and 12 TDs, as well as rushing for 963 yards and 10 TDs. Pope earned a scholarship with the Boise State Broncos, where he played wide receiver, and appeared in all 13 games his senior season.

Now back in the desert with his hometown Coyotes, Pope is fondly remembered by La Quinta fans as their play-making quarterback, where he also starred on defense and was named team MVP, all-Desert Valley League and all-Desert Sun. The 6-2, 190-pounder has been working out all summer with Coyotes starter Michael Karls. Pope enters camp with a proficient grasp of the Coyotes vaunted Run ‘n’ Shoot attack – from both ends.

3. Slotback Ross Robertson will have a breakout season.

Last year as a rookie, Robertson was a training camp surprise at both slot and running back. His great hands, good feet and an extra gear caught the attention of coaches, but in the Coyotes ocean of talent, it’s easy to get lost at sea. After four Coyotes starters advanced, Robertson had a full off-season to prepare for 2018. He returns this year ready to make a move at slot – and the former college running back will be a double-threat at tailback, in relief of Nigel Simmons, who is expected to carry the load.

The 6-4, 280-pound, second-year guard out of Arizona State returns faster, fitter and with a fuller understanding of the Coyotes’ Run ‘n’ Shoot. For offensive linemen, the Run ‘n’ Shoot is screen, draw, and trap heaven, and Struhs’ intelligence and quick feet will resurrect trap plays like ‘Rip 33 Kick’ from the Coyotes playbook.

Struhs didn’t miss a game as a rookie, and he anchors a returning group of veterans up front that can ground and pound just as well as they run and shoot. Struhs will play inside of veteran 6-3, 330-pound tackle Johnathan Zazueta, who has started all 11 seasons for the Coyotes.

5. Jordan Warford will play up, down, and everything in between – and maybe a few snaps at running back.

Jordan Warford, a Coyote walk-on from two seasons ago, has yet to lose a game – and seldom leaves the field. In 14 Coyote appearances, Warford has played nose, end, linebacker, rover, strong safety, and this year has asked to get a few reps at running back, where he played in high school. Don’t laugh. Warford brings a lunch-bucket intensity and work ethic that has made him a favorite among the veterans. With his thirst for contact and penchant for pain, Warford is fascinating to watch – and living proof that anything is possible.