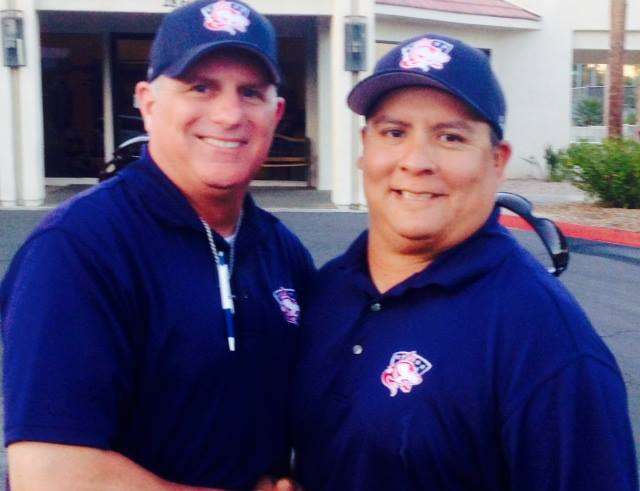 (SAN DIEGO) — The Indigenous Bowl – the largest all-Native high school football game in the country – will kick off July 7 in San Diego, and implementing the football operations of the bowl experience is SoCal Coyotes VP Football Operations Shane Helms.

Helms, who also serves as Executive Director of the Native Athletic Institute (nativeathletic.org), huddled this week with SoCal head coach David Miller to align support from the Coyotes non-profit for not only the game, but also NAI, and to increase opportunities for Native American youth.

“This bowl game will allow Native youths to showcase their skills to colleges,” Coach Helms said. “If their future doesn’t include college football, then they get to share in this amazing experience to put on the pads one more time.”

The SoCal Coyotes will soon announce plans for construction of The Shield at 1 Coyote Way, a unique mixed-use sports campus that includes a multi-purpose

stadium. Helms is working directly with Coach Miller to deliver an array of Native American opportunities for youth sports and training to The Shield.

NAI, 7G, the Native Coaches Association are working together to create successful sports platforms for Native youth, including the Indigenous Bowl. NAI, Helms, and the Coyotes are offering professional experience at no cost to the athletes or their families.

On the field, Coach Helms is working with John Harjo, a coach at Idabel High School and a Muscogee (Creek) citizen, who started the Native All-Star Football Game in 2002 and oversaw its success for nine years.

Joining the partnership for the game is NDNSPORTS and the Soboba Band of Luiseno Indians.

“These memories, and these relationships, last a lifetime,” said Coach Helms, who coached the ‘Darkside Defense’ of the SoCal Coyotes during two of their five championships, before moving to the front office.

Eligible participants for the Indigenous Bowl are Native American and Alaskan Native high school senior football players along with Canadian First Nations who will graduate in the spring of 2018 or fall of 2017.

The athletes are required to prove their Indigenous heritage by providing tribal identification from a federally-recognized Native American Indian tribe, a Canadian First Nations tribe or a Certificate of Degree of Indian Blood issued from the U.S. Bureau of Indian Affairs.

Players will report to the Soboba Reservation July 3-4 for camp. Young Native athletes from all over the country will join together to share in a collegiate football atmosphere, complete with group meetings, film study and practices.

They will have the opportunity to learn from great coaches with Native backgrounds and share stories, values and culture with each other. They will also have an opportunity to experience the hosting community’s culture, environment and people.

According to Harjo, they are taking prospective players right now. Muscogee (Creek) citizen and All-District Offensive Lineman at Tahlequah Sequoyah High School, Blayne Allen will play in the game, and others who wish to join him can do so by messaging the Indigenous Bowl Facebook page for information.

Players who are accepted to play in the game would be responsible for travel to California. Once they are there, everything is taken care of for the week.

The event culminates with the game July 7 in San Diego.

Native Athletic Institute was created to educate, motivate and inspire youth and youth coaches in the institutionalization of athletics and academia, with an emphasis to the Native American youth.

Besides educating youth in the aspects of sports, NAI educates parents, coaches and youth with the standards and procedures that are required in a student athlete’s education and sports career. There is no cost to the athlete for NAI’s services.

NAI has created an environment that not only nurtures student athlete(s) toward college, but also builds relationships, and reciprocates leadership, throughout Native American communities.